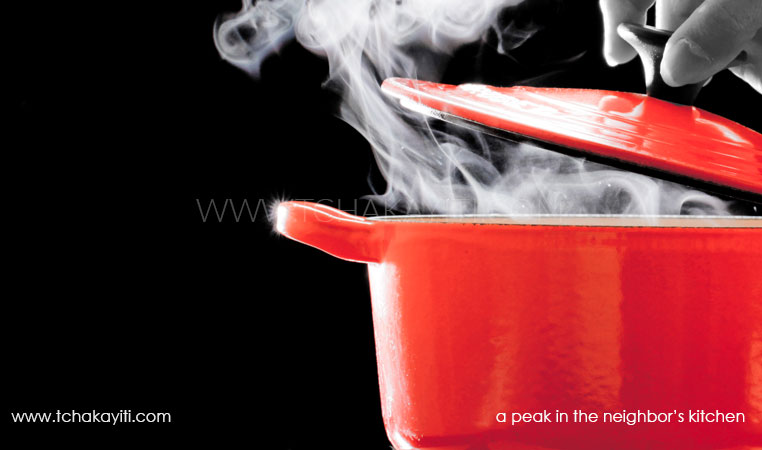 A peek into the neighbor’s kitchen

As I emerged out of bed later than usual this morning, the aromas of a meal being prepped pleasantly greeted me. It was a pungent smell of fish that whet my appetite. In a matter of seconds, I was able to identify it and come to the conclusion that, unfortunately for my then growling stomach, it was the neighbor’s meal of the day.

I could make out the smell and flavor of some aransò en sauce (smoked salted herring with gravy) on the stove. It was to be served with some mayi moulen (cornmeal) that was most likely cooked with some fresh-diced tomatoes and would be eaten with the herring gravy; all that served with some good ol’ zaboka on the side, the way my dad would want it.

As I deconstructed that dish from afar, I suddenly wished it were being prepped at my house. Yet, one disappointing fact remained true. There was no way these wonderful aromas were coming from our kitchen for we did not cook such dishes at my house in the wee hours of the morning. I couldn’t, however, help wanting to partake in that feast, even though I couldn’t easily figure out which neighbor’s kitchen it was being prepared in, and was well aware of the fact that that wish would never come true.

Yet, happiness invaded me. Without knowing it, someone had invited me, well my nostrils to be more precise, to their family meal. I couldn’t help but smile at the thought of being able to peek into a neighbor’s kitchen without being noticed or leaving a trace.

I was thoroughly enjoying this olfactory experience which was not new to me in Haiti for, as mentioned in my article about the mortar and pestle, we live in open spaces that allow aromas to permeate every corner of a house, even those coming from a neighboring kitchen.

As my nose sampled that mayi ak aransò trying to make out the different ingredients, picking out the smell of the infamous pat tomat and bouillon cube, – these are infamous yet popular ingredients in many kitchens in Haiti – I couldn’t help but recall another similar experience that had tantalized my taste buds in the same fashion a couple of months ago.

It was on one of our walks in the hills of Fort-Jacques. We were passing a block when a strong and pleasant vanilla aroma filled our nostrils leading us, my mother and I, to a conversation about what exactly was being prepped. As we tried to make out the components of that dish, we came to the conclusion that a labouyi of some sort (porridge) was simmering on a hot stove.

Hunger had immediately struck. Just like this morning, my taste buds were longing to sample this sweet dish, and I wanted to be there as they poured out whatever that sweet preparation was into serving bowls. It was quite a challenge to refrain myself from trying to figure out the source, but it was also an experience I wouldn’t give back for anything in the world.

There is just something about being able to inadvertently taste someone else’s meal. As odd as it may sound, it makes my world a better place.

After all, in how many places in the world can you inadvertently invite yourself into a neighbor’s kitchen?