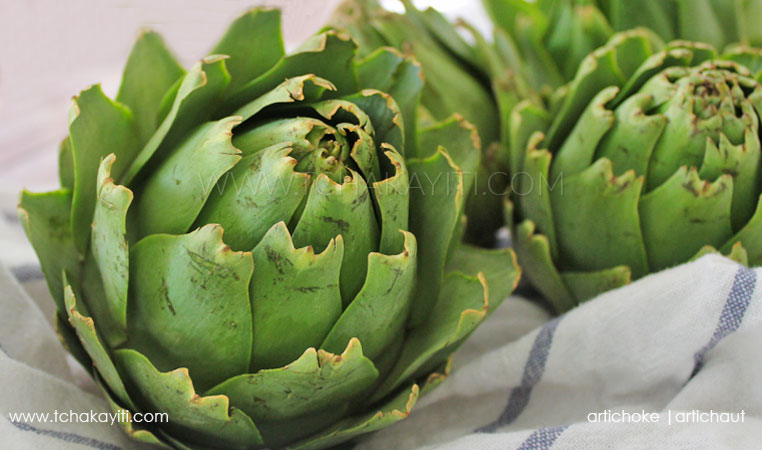 It’s Sunday. The table is set. Alongside each place setting are brown ramequins. Their sight brings a smile to a young girl’s face.

The ramequins are not just there to enhance the Sunday table setting. They’re the unofficial announcement that it is about to be a Sunday dinner worthy of waiting for.

At dinnertime, each ramequin will be filled with homemade vinaigrette. Why? There will be artichokes on the menu. That is the only time her family gets individual ramequins. They will dip each petal in the vinaigrette before eating their soft edible pulp.

Being the youngest at the table – her younger brother wasn’t old enough at the time – the girl knows that this meal will require that she strategize. Though five artichokes will be served, one for each person at the table, she will get the smallest one.

There is something odd about the way street merchants sell artichokes in Haiti. They come in bunches of vegetables that are unequal in size. Regardless of how many artichoke flowers it carries, a bunch always seems to include one or two oversized vegetables at most. The remaining ones are always smaller in size.

The girl can’t help but wonder why they are packed in such a disproportionate manner. Is it so they can be more fairly priced? Or is it because those street merchants know that somewhere in every household lives a young girl whom they can torture with a tiny artichoke? Without question the latter must be the answer. It is a devilish plan, but she will not let them win.

She knows the artichoke size battle is one she’s lost in advance. Being the baby of the family, she will never win it. There is, however, the possibility of a small victory.

She’s devised a plan to make her artichoke outlast everyone else’s. Though small, her vegetable will become the biggest one on the table.

The artichokes will be served as the first course. While everyone will quickly eat theirs, dipping and eating several petals at once, she will resolve to what Haitians call “fè lasisin.” She will slowly savor the flower one petal at a time. Once she reaches the artichoke heart, she will set it aside.

That last move will make everyone envious at the table. Her family members will each ask her if she’s done eating in hopes of getting the heart. She will dismiss that repetitive question with a nonchalant no. Just like them, she will resort to eating the remainder of her meal all the while keeping a close eye on her artichoke heart.

She will go back to her artichoke once everyone is done with dinner. She will remove the fuzzy center, also known as choke, from the heart, which she will dip in the vinaigrette and savor under their envious looks.

That will be her way of getting back at both the street merchant and her parents for thinking her worthy of the smallest portions.

Though small, her mighty artichoke will outlast every artichoke on the table.