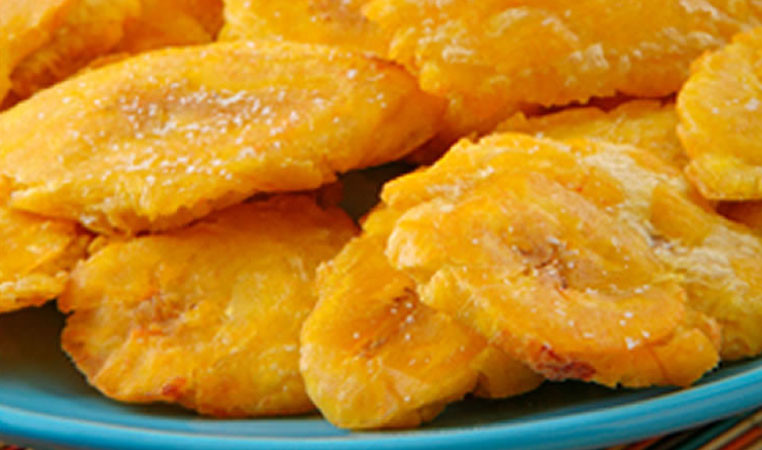 “Bananes (plantains) pesees?! I thought they were pressees?!” That’s what a French speaker from abroad once told me when I brought up this treat.

For our English speakers out there, the word “pesees” in French means “weighed” and “pressees” means “pressed.” Got it? Good. Moving on…

I replied with a simple yes before explaining that these plantains were pressed between two flat surfaces, which can be a wooden plantain smasher, two pieces of the vegetable’s peel, for the experts, or even two small plates like we sometimes do at home, thus the name bananes « pesées ». An explanation which she refuted by saying, “…but the word ‘peser’ has an entirely different meaning…”

That’s when I realized that the word “peser” might actually be deemed inappropriate by other French speakers because that word does mean to weigh in French…but I will stick to the fact that at home, our plantains are indeed “pesees,” not for their weight but “pesees” for pressed…This slip of the tongue is probably a Creole heritage since in Creole our plantains are indeed “peze.”

Our bananes pesees, like I was telling my friend, are plantains that are fried twice. The plantain is cut into two or three beveled pieces that are dipped in salted water and then precooked in hot oil until they are slightly golden. The precooked pieces are then flattened using either the peel, a smasher or two plates before being fried a second time in hot oil from which they come out crispy.

They are best enjoyed with Haitian pikliz or simply sprinkled with salt, for those who don’t like the spiciness of our peppers.

Try making them yourself using our recipe. The good news is that even if you don’t successfully flatten then and they don’t come out quite like in the picture above, which happens to me quite often, whether they are pressees or pesees, the taste is always the same. Our bananes pesees always taste better than French fries no matter what, I can promise you.

And don’t forget, the next time you hear a Haitian speaking French and using the term bananes pesees, don’t rush to correct them. We know what we are talking about; our plantains are indeed bananes “peze.”