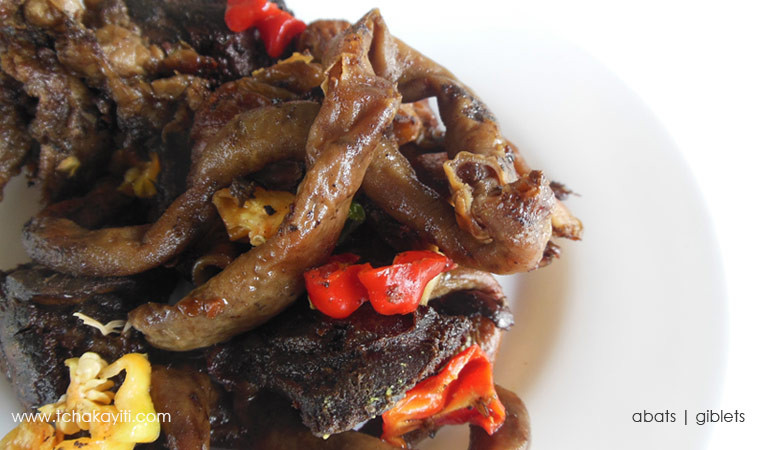 The sight of this plate at a family gathering, a few weeks ago, brought back many childhood memories.

Before I dig into the story, I should probably explain what is on the plate as I am aware some of you may be clueless about its content. This plate is filled with well-seasoned and spiced pork giblets, boudin, and ears, to name just a few of what was left of the pig which life was lost earlier that day to prepare our dinner.

This deliciously creepy plate brought me back to a period of my childhood when the family would gather to indulge into a feast where fresh goat was the main ingredient on the menu which almost always included freshly prepared boudin and accordeon, served as an appetizer, and grilled goat as one of the main dishes.

It also brings to mind certain farm animals we kept in our own backyard until they were big enough or until the neighborhood butcher could make it to our house, whichever happened first. The cattle, which most of the times included live turkeys and goats – we sometimes had guinea fowls and chickens as well – came from the provinces of Haiti. I was always enchanted when dad brought home those gifts he had received – it’s common practice for those living outside of Port-au-Prince to come bearing live animal gifts at the end of the year during the Holiday season.

A live turkey or goat in our backyard meant endless hours spent mimicking their sound so they could mimic us in return, a habit that drove the adults surrounding us nuts. Our favorite past time was to imitate the turkeys because the more they gobbled, the redder their pinkish head turned, and the more upset the grown-ups got.

I can still hear my grandmother, who often had live turkey in her backyard as well, shouting: “Enough! You’re wearing the turkey out. You will end up killing it.” What she didn’t seem to realize was that those exact words encouraged us to keep going. I am quite sure we were defying her to see if our little game could really lead to the turkey’s death. And of course we were always disappointed as that never happened.

The live cattle also meant that we would witness the slaughtering process. I was personally fascinated with the goat killing method. While I couldn’t stand watching as they sliced the animal’s throat or let its blood flow into a bowl for the cooked blood we would eat later, I demanded that my sister, who was bolder than me and thus watched the entire process, call me right before they started separating the skin from the flesh.

That process enchanted me. I was amazed by the butcher’s use of a weed-leaf stem as a straw that helped him blow into the animals skin so that it would be easier to separate the skin from the fresh flesh, keeping it intact. This step made the animal look like a goat shaped balloon, which is why I enjoyed watching it.

I won’t share these in images, as I don’t want to offend the sensitive souls reading me. I think it’s already odd enough that I seemed to enjoy these experiences so I will leave it at that.

In my defense, I believe I was okay with the process because, as a meat lover, I looked forward to the feast that was sure to follow.