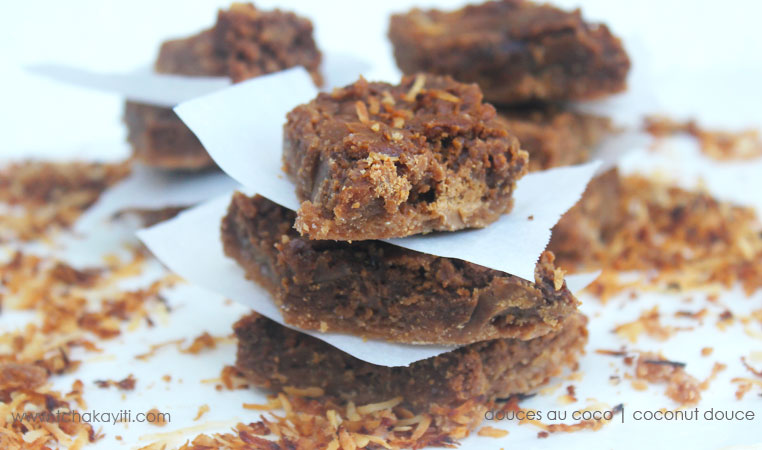 These chewy looking chunks of goodness are not brownies. They are homemade melt-in-your mouth coconut milk and sugar bites by yours truly. They are what we call here: douce kokoye, coconut douce.

After my douce escape article form a while back, I simply couldn’t resist the idea of trying my hand at making my own douce. I was craving that taste of my childhood. I thus asked for a family recipe that I received a few months ago, a recipe I was a bit reluctant to try at first for it was interestingly worded, if I may describe it that way. The instructions went as follows:

“You use coconut that is rich in milk. You mix some evaporated milk with the extracted coconut milk, and then use a ratio of three to one. This means that you will use three cups of the coconut milk and milk combination for one cup of sugar. You add some cinnamon and lime zest and you put it all on the stove. You have to watch it so the liquid does not spill over. (You can remove the excess as it rises and add it again to the pot). Once the liquid thickens you had some vanilla extract and spread the preparation on the table. You let it cool down and…Bon Appétit!”

Reading the above paragraph makes me chuckle. It not only exemplifies the simplicity of it all but it also perfectly illustrates the Haitian way of giving out recipes. As I mentioned before in the intro to this blog, in Haiti, we rarely give proportions. Thus just like this one, many of our recipes don’t really list ingredients beforehand. Instead, they just start with an explanation of the required steps without ever really giving out clear instructions for proportions. To avoid missing any ingredients, the careful cook must first read the short paragraph and then list them all before starting the cooking process, which is what I had to do before using the above recipe.

You now have an idea why it took me some time to finally try to make this douce kokoye. Truth is I was planning to use some already made coconut milk and was unsure whether I should mix in some more milk or not. Though I was a bit dubious, I finally took the plunge this past weekend and used some store-bought coconut milk only. And boy was I satisfied. So satisfied that I went straight to the grocery store the next day to get more supplies for a second batch.

What I didn’t know at the time was that with this new batch I would also discover a new version of the douce kokoye. Indeed, with that second round, I unintentionally left the preparation on the stove a little bit longer. That resulted in a darker and chewier douce with an even bolder coconut taste than the previous day. In comparison, the first batch had come out a with a light brown bag shade that reminded me of the douce lèt I was so fond of throughout my childhood.

All things considered, regardless of the way this recipe was worded, one thing is certain: once you’ve decrypted it, you will master it. The only decision you will have to make it whether you leave it a bit longer on the stove so it can caramelize or not. My advice is to let it caramelize. My tough at-home critics leaned toward the second batch that disappeared quickly.

Now why don’t you try your hand at your own douce kokoye? A rewritten version is below. Do let me know how you like it…Bon Appétit!