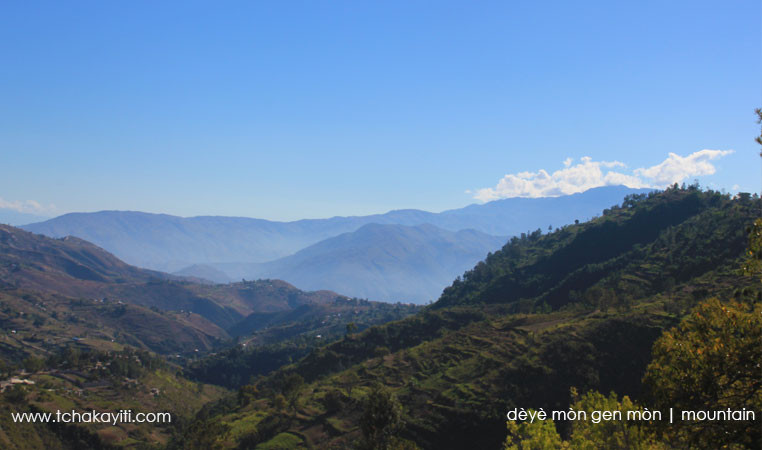 Embracing life in the mountains

Look at this picture. Imagine crops lining up to infinity on each of those mountainsides… Think of cabbage or potato plantations, cornfields, and other crops… Mountains beyond mountains, harvests beyond harvests…

Think about growing up watching men hard at work plowing the soil to prepare it for the crops, and a few weeks later witnessing them reap the fruits of their hard labor… Are you able to picture it yet?

Such was the tableau throughout my childhood. From the land next door to the endless hills we climbed up during our long escapades, we were almost always surrounded by vegetable or fruit gardens, as mentioned in my lakou lakay article, to such a point that they became part of my daily life. Most of the time, I didn’t even have to look out the window to know that they were harvesting or preparing the land next door for future crops. Those abitan working the land were my morning wakeup call.

Indeed, early in the morning, you could hear the sound of their rake or hand cultivators hitting the soil they were preparing; sounds that were interrupted by casual conversations, sounds that had become like a soft morning murmur as we emerged out of bed.

I was always impressed by these hard workers especially the ones planting along the steepest of our mountaintops. Somehow, they manage to not only stand on those high slopes, but they also successfully trace them so as to align their crops perfectly. In my eyes, those men and women were artists. They turned our mountaintops into impressive scenery that left one speechless.

I still recall some of our silent conversations as we reached those tops and just stood there staring at the endless mountaintops, conversations that most often ended with us questioning one another about how these gardeners could possibly keep their balance, for, from afar, those lands look rather steep.

Such were the memories that came to mind as I looked up the mountains the other day and smiled. There is just something about living in the mountains of Haiti, something hard to express in words but yet something that sticks with you forever.