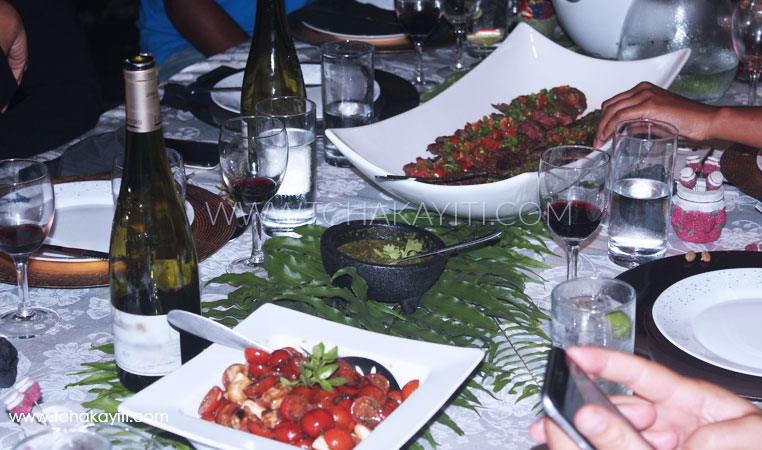 As I look back to the above table, I cannot help but smile at the memories of that unforgettable 30th birthday feast I prepared a couple of months ago.

I also have a smirk on my face as I think about those of you who are probably appalled that I dare share such a table on a food blog which claims to be all about Haitian food.

While I cannot deny that this picture doesn’t really scream Haiti, I will argue that this feast still deserves a spot on Tchakayiti.

The menu components may not be local, but each offering was most definitely prepared with a local flair. After all, a cook can’t really claim to be able to fully detach himself from the flavors he grew up with, especially in a country like Haiti where we like everything with a pinch of piment bouc.

Plus, so many of our dishes have roots in foreign countries. Take for example my previous mèchi and seven cooks article, which speaks of the Middle Eastern influence on our culinary culture. The same could probably be said about my shrimp marinades from last week. They’re probably the equivalent of what the rest of the world calls shrimp beignets but the recipe is based on the seasoned batter we make for our traditional chicken mardinad.

I won’t go further into details about how our cuisine can be global as I am sure that fact will transpire through my future writings. I will, however, go back to the beauty of feasts similar to the one above.

I want to pay tribute to those traditional family dinners that are so commonplace on our land; family dinners I grew up to both love to hate and hate to love. Love to hate because at some point during my adolescence, like any teen would, I was tired of being around family 24/7. Hate to love because after spending time abroad, I have come to value those family events, which are ingrained in our culture and traditions.

As far as I can remember, we have always hosted family dinners on special and not so special occasions. Holidays, Sundays, birthdays, just because days, any excuse is valid to plan a family gathering. All it takes is a few people willing to spend quality time together for a feast to follow.

These events are a chance for family members to catch up. They are also our way of winding down after a long week in a fun and friendly atmosphere. The highlights of our dinners are those jokes the adults make about each other or the pranks they pull, which sure make for a light-hearted atmosphere.

How could I ever forget those arguments over specific dishes such as the acras that got split into three pieces for a lesson on sharing – if you’ve missed that article, I highly recommend you go read it now – or the pig head which was gobbled up in a matter of seconds.

So many food memories to cherish; so many cooks whose food make those events delightful. With more than seven great cooks on one family, we do have our share of aspiring cordon-bleus whose food is worth arguing over. ☺

I am sure many local families can make similar claims. After all, food is at the center of mostly everything here in Haiti.