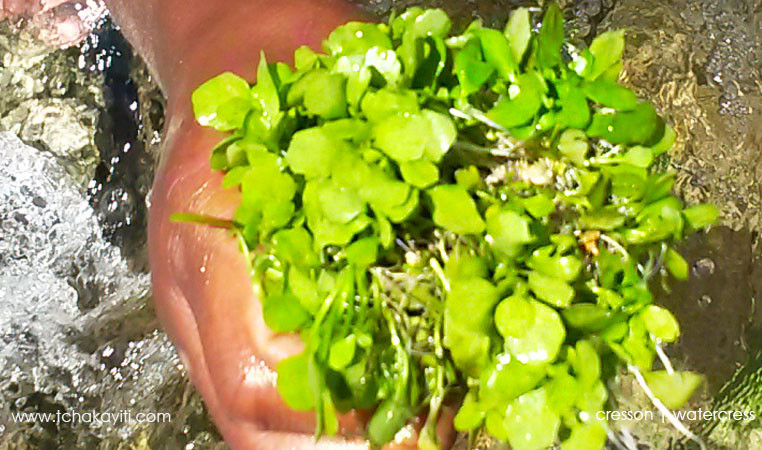 Yes, you read right! I swam with watercress this past weekend.

We had gone exploring in Saut d’Eau, north of Port-au-Prince, when we ran across a 12 year-old boy who offered to take us to a pond called “Cresson”. It was a hot day and we were eager to dive into some cool water so we agreed to let him be our guide.

We had no idea what to expect once we reached our unknown destination. We knew what the word meant – cresson is the French word for watercress – but we were far from imagining that he literally meant that said pond was a watercress bed.

Upon our arrival at “Cresson” we were indeed greeted by a pond filled with greenery we could not really identify. For us, it was simply some aquatic vegetation, nothing more nothing less. We were thus a bit dubious when the boy explained that we were looking at fresh watercress that could be handpicked right here and there for the day’s meal.

We had all eaten cresson in one way or the other before – in Haiti, we incorporate this herb into our soups and stews or eat is as a salad – but had never once stopped to think about where it came from. After all, watercress is often sold with its roots on, so it must grow in the ground, or so we wrongfully believed.

I still recall the first time I ate watercress. I was probably around 10 years old, and it was featured raw on the menu as salad. Since I had no choice but to eat what I was served, I bit into it. And boy, was my palate displeased by the strong piquant flavor.

Since that day, I don’t think I ever dared eat this herb. If I did, it was probably inadvertently in some bouillon (stew) or soup. And I must confess that, unfortunately, my watercress swim did not help reconcile my palate with the herb.