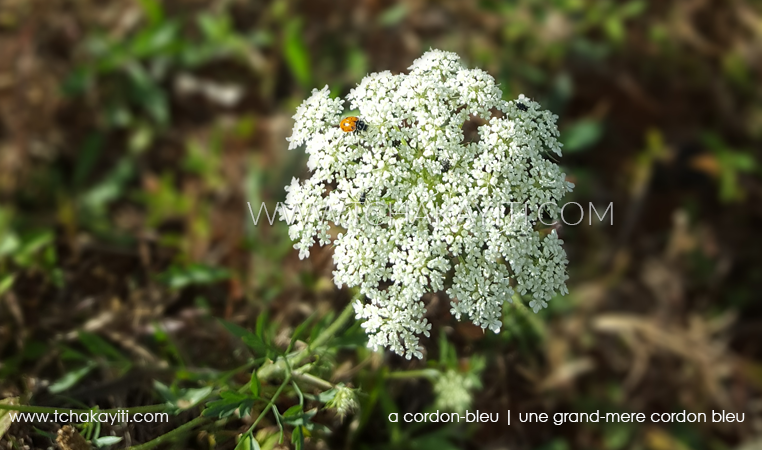 Yesterday, during an escape to the hills of Furcy, I stumbled upon this wild flower in the middle of a pois congo plantation.

At the sight of that wild vegetation, I couldn’t help but think about my grandmother, my favorite Haitian cordon bleu. Souvenirs of my adventures in her backyard came rushing back as well, some of which you’ve read about on this blog before.

In honor of all those great memories,  today, my article won’t feature a dish or a specific Haitian produce or recipe. Instead, it will celebrate the culinary life of the great chef that my grandmother was.

Her recent passing led us all to gather among uncles, aunts, cousins and friends in the same dimly lit living room where she had hosted us so many times before around her tchaka casserole. We couldn’t help but evoke our best memories of her, most of which evolved around her culinary skills.

Some brought up their favorite puff pastry, which was stuffed with calf brains. Others shared their unpleasant encounter with that very same meat the very first time they had been invited to her family table. They spoke of how they had had no choice but to eat those guts, as they could not get themselves to tell the perfect hostess, whose culinary talents they had so often heard of, that they disliked her dish of the day. That story had us all laughing out loud.

As I was listening to their many stories, I couldn’t help but reminisce about the great food adventures I had at her house throughout my childhood.

It’s at my grandmother’s that, to her dismay, I had the most fun making turkeys gobble.  There, I also discovered the joy of climbing mountaintops to interact with Mother Nature.

From her backyard, I witnessed as many crops being planted as harvests. I also watched her bargain with the butcher who sold her fresh meat. I can still see the street merchant who settled on the ground on her front porch with her red plastic bowl filled with meat.

In my grandmother’s kitchen, I watched in awe the shelling of pois congo. I drank dlo diri straight from simmering pots of rice. I also quite often saw a boiling pot of fresh cow milk, the same milk my grandmother would later transform into her tasty homemade butter, which we enjoyed with fresh bread.

How could I ever forget her unique Caribbean apricot jam; her bonbon sirop, which recipe no one else seems to be able to master; her Saturday evening tchaka steeped in flavors of smoked salt-cured pork meat; her cured pork leg; or her jars filled with whole piman bouc which my red-faced uncle most definitely enjoyed for many years.

Thanks to my grandmother,  my Haitian cordon-bleu, I have so many food stories to tell, so many memories to share, so many recipes to try.  Through her cooking, I discovered a world of flavors that were unique to her kitchen, and enjoyed endless dishes filled with love.

Toutoune, you gave us so much love through your cooking, and for that I am eternally grateful … Thank you!