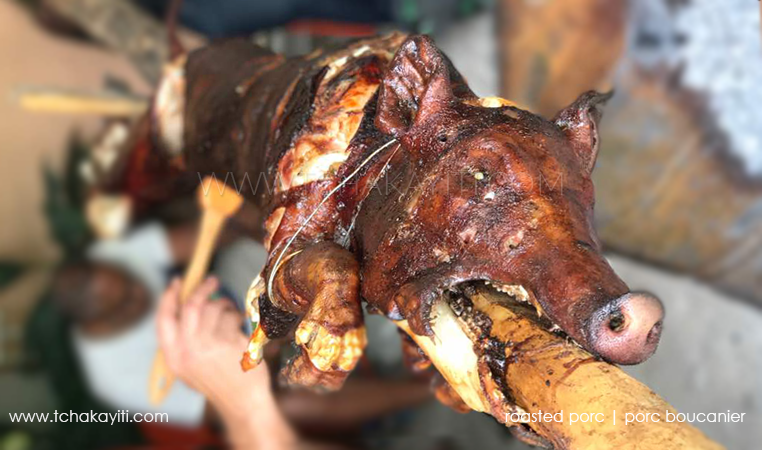 A couple of weeks ago we received a phone call. The day had finally come. A piglet had been bought. And we were all invited to partake in a pork feast. We could not contain our joy.

For weeks, if not months, we had anticipated this feast. Animated conversations had taken place at family dinners. Each person was to contribute to that unprecedented family event. And the day had finally come.

Except it was more of a two-day event. The animal had to be put down and prepped. It also had to roast for a couple of hours. We absolutely had to witness the entire process.

The excitement thus began 24 hours prior to our dinner. The pig was slaughtered before a small audience of Haitian rum consumers. The animal was cleaned and left to hang. Its tripes, giblets and blood were extracted, and either cooked or preserved in anticipation of unique dishes. I myself got a call at seven that evening. I was summoned to the making of the pork boudin.

For years, I had been eating those stuffed intestines without ever seeing them prepped. It was thus a joy for me to rush into that kitchen and join the party. We were all clueless about the process. Yet we mastered it. The blood was seasoned using instructions gathered here and there, and stuffed into the bigger tripes, which were tied with a thread and put to a boil.

The seasoning and roasting of the pork took place the next day just a couple of hours before all the guests showed up. That morning, I was unable to attend. The Haitian rum consumers were, however, faithful to their post. They took turns turning the makeshift crank, and…flooding my phone.

My personal reporters, better known as uncles, aunts and cousins, sent videos and pictures. I won’t share them here with you. They are not for the faint of the heart. Some of you may even deem them inappropriate or gruesome. I must, however, confess that they made me even more eager to partake in that lavish dinner. 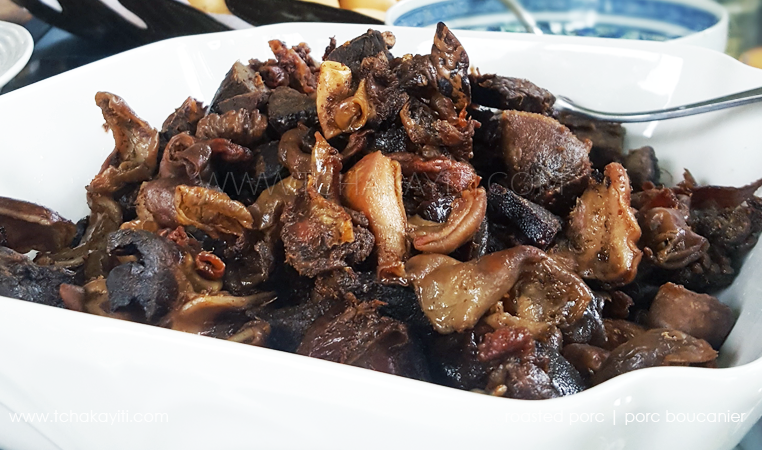 No edible part of the animal was left untouched. The giblets and smaller intestines had been cleaned, seasoned and deep-fried. So was the previously cooked boudin. They were all served with dinner rolls as appetizers. Needless to say that, as per our family tradition, everything was gobbled in a matter of seconds. 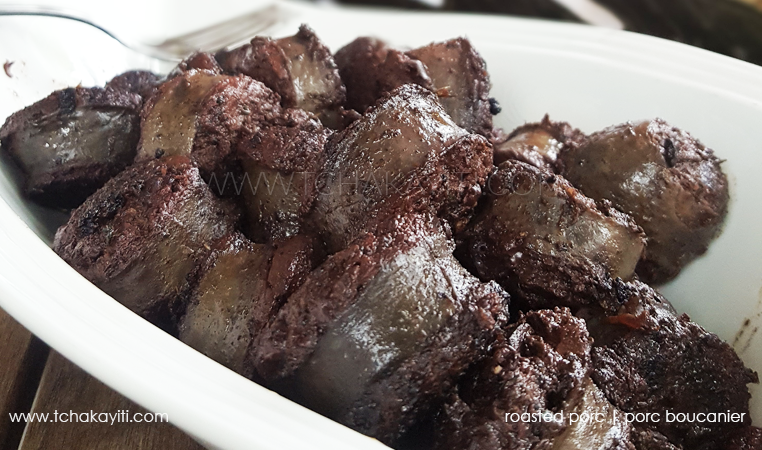 The roasted pig was not spared. It had been beautifully set atop banana leaves and flowers with an apple in its snout. That wonderful setup did not save it from our appetite. It was devoured in a much similar fashion as the appetizers along with a fresh garden salad, vegetables, bananes pesées and a potato casserole, among other side dishes.

The evening ended with a light dessert, and heated yet pleasant conversations. That pork feast was yet another wonderful time with the family, another perfect Haitian evening for the books.