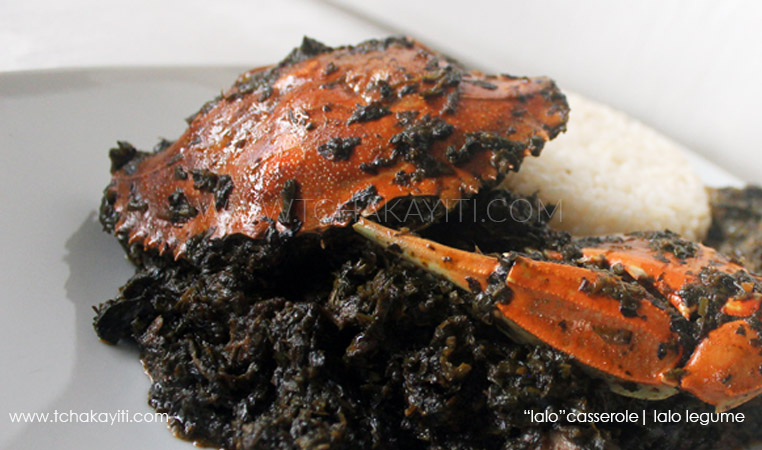 A couple of weeks ago, I had the chance to finally enjoy the savory dish pictured above thanks to an uncle who had brought me some back from a trip outside of Port-au-Prince.

I was ecstatic at the sight of the to-go plate. It had been more than a year since I had my last lalo fix. Lalo is a Haitian dish, which I am a fan of but get to sample on very rare occasions. Truth is I am extremely picky with this Haitian specialty. I don’t believe just anyone can prepare a savory lalo casserole. Lalo is a specialty of the Artibonite region (north of Port-au-Prince) where that city is located. I thus refrain from eating it in Port-au-Prince, unless it comes from a Saint-Marc native.

After such a long hiatus, sampling some lalo brought joy to my taste buds. It took me down memory lane to delightful food adventures. With the very first bite, I was taken back to a playground buzzing with activity. Hundred of chatty teen girls in uniforms who were carrying plates filled with various Haitian dishes surrounded me. Loud exchanges, laughter, jokes, conversations about food and overstuffed stomachs filled the air creating a joyful atmosphere.

Yes, with just one bite of lalo, I was taken back to my high school playground, the very same playground where I had first discovered it.

I recall that day as if it were yesterday. I was attending our high school’s First Annual Food Festival, a yearly feast in celebration of Haiti’s Flag Day (May 18th). That food fair was a time for us students to discover various dishes that are part of Haiti’s rich food repertoire. We discovered many regional dishes. That festival was a tasty tours of our country through its marvelous aromas, smells and flavors.

Lalo was one of those regional specialties we got to sample. A cirique and pye kochon casserole, it had come to us straight from Saint-Marc.

My first encounter with this dish was not love at first sight.

Flavorful aromas of seafood and pork had lured me to a food stand. There, I caught sight of a pot filled with a dish they described as a touffe legume. It didn’t look anywhere near a toufe, however. It had an unappealing deep green color and, as you should know by now, I am not a big fan of vegetables. I was thus immediately turned off.

It took the vendor and some people from my entourage to convince me to give it a shot. They described the dish as one prepared with lalo – jute leaves in English, – instead of eggplant and mirliton, that was as flavorful as the toufe I was so fond of.

Since I had acquired a taste for our toufe, which recipe you will find here, and loved the taste of our blue crabs and pig feet, I let myself be convinced to take a bite. And boy was I surprised! Right here and there, I discovered a wonderful world of flavors. I discovered a hearty and tasty casserole enhanced with strong flavors of the pork meat and cirique which juice had permeated the entire dish.

I’ve been in love with lalo ever since.

I am pretty sure many among you are probably dubious about my love for lalo. Just like me, you will probably be rebuked at the sight of this dish. To you I say, yes YOU with that disgusted look on your face, don’t dismiss this casserole without giving it a chance to prove itself to you.

Your taste buds and body will thank you (lalo is rich in protein and irons). 😉