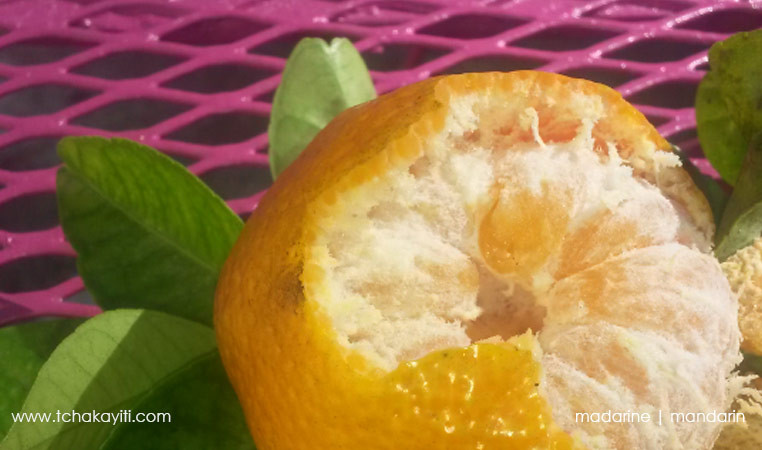 Summer is upon us. And though mandarins are not a summer fruit – the peak of the season is between February and April though they can start producing as early as October – I couldn’t help but write about this fruit. Its bright orange color simply screams summer.

Sure there are more suitable fruits like watermelons and mangos that could be featured here, but a ripe mandarin is just a ray of sunshine in itself. So why not pretend it’s a summer fruit? Plus I could argue that we don’t have real seasons in Haiti so February could well be early summer for us if we wanted to call it that way. But I’ll refrain from doing that. February is cool enough not to be referred to as a summer month…

Let’s just get back to the topic at hand. The sight of this picture of a mandarin brings to mind a family story we love to share every once in a while, a story that is sure to bring laughter to a party. That story involves my four year old little brother about 16 years ago. Back then he was pretty much addicted to mandarins, if one can use such a strong word for such a young kid. He could indeed eat a dozen in just one day without stopping. And I am not exaggerating.

That particular day, this little guy had eaten so many mandarins that my sister warned my mom not to let him eat any throughout the evening saying that overeating mandarins lead to indigestions. He was putting so much passion in eating this fruit, however, that my mom, who was amused by my sister’s claim, simply brushed it off by telling her to let him be.

Little did she know, my sister’s prediction would turn out to be true. That night, at the young age of four, my little brother learned the hard way that it’s important to eat everything in moderation, even mandarins…

I shared my little brother’s story here but truth is this could have happened to any of us four siblings. When we were kids, we all loved mandarins. They were the joy of our school days and of our afternoons at home. My parents brought them home by the dozen on a regular basis when they were in season, and they barely survived a day.

Today, we are fortunate enough to have our own mandarin tree, which produces so much at once that we have enough to share with those around us including the birds that have made our garden their main alimentation source. This year alone, mom and I made it our mission to handpick mandarins every Saturday, and each time we got more dozens than we could possibly keep track of. So of course you can imagine we sent some home with our visitors or to our friends the following Monday.

There is simply no way we could have eaten them all between the five of us. Then again, maybe we could have. I am beginning to think that it’s the memory of my little brother’s misfortune that forces us to pace ourselves.

Oh how one indigestion can change one’s eating habit for life.