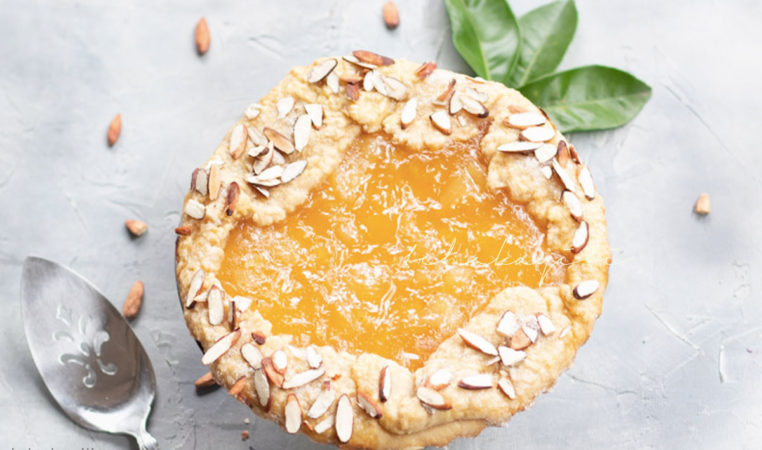 A potpourri pie? What kind of pie bears such a name? The kind of pies I create on Tchakayiti while playing around in the kitchen, of course. My very own citrus pie to be exact.

All jokes set aside; this name came about during a casual conversation I had with one of my friends the day I prepared that pie for the first time. That day, we were talking about the culinary adventures we had each embarked on. Turns out, without planning it, we were both making pies. Only hers was savory and mine sweet. She was baking a cheesy tomato pie. I was prepping a nameless pie.

That no-name pie erred on the side of citrus and tropical almonds.

I was unsure what to call it at the time especially since I was not following any recipe. I was just creating a citrus pie on a whim. So, all I could do while talking to her, was describe the ingredients I was combining. For some reason, my description led her to baptize my concoction a potpourri. On the spot, I did not quite understand why she had used that term. Turns out, without meaning to, I had apparently made it sound like I had tossed everything in my kitchen in the filling. 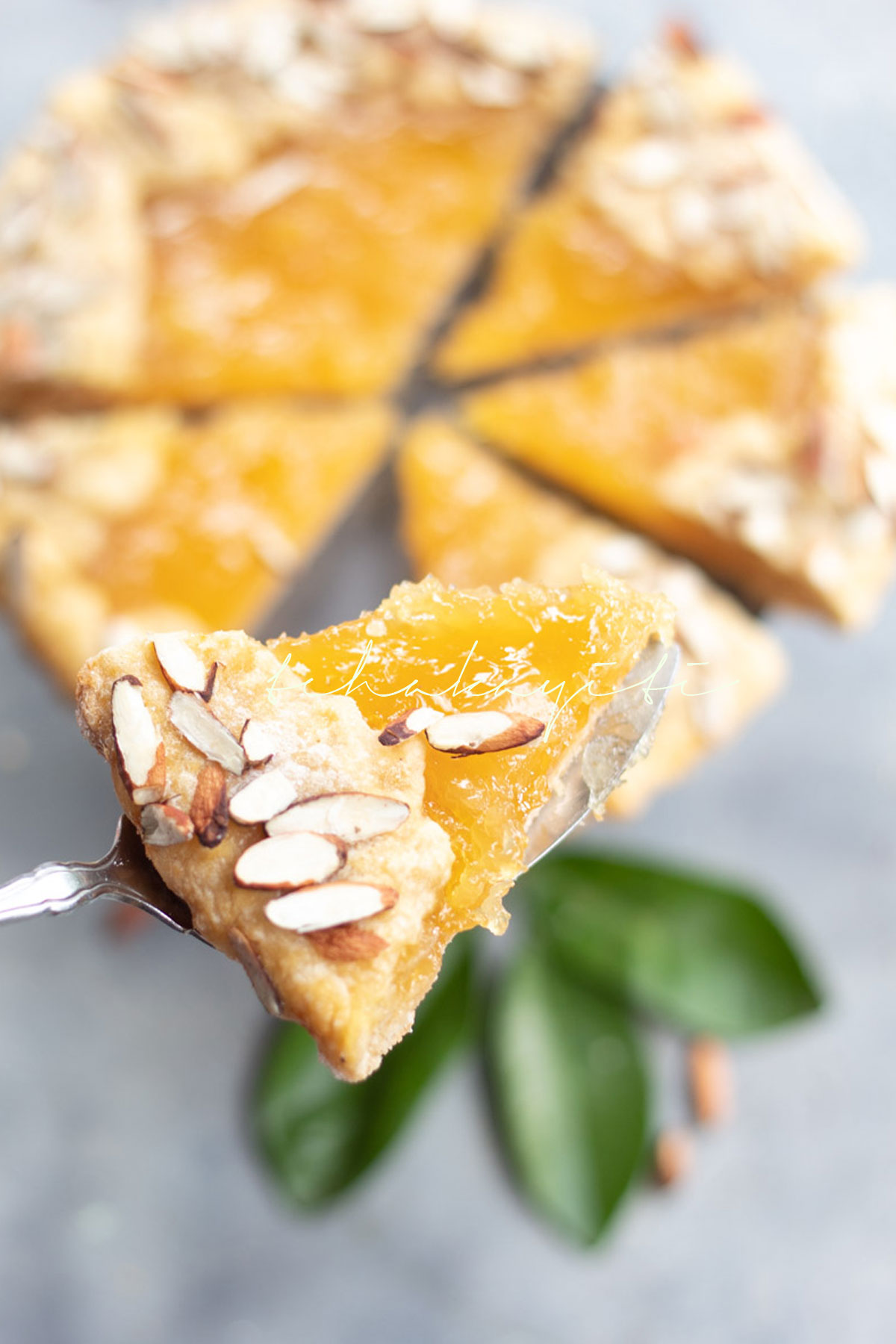 While the word potpourri did not seem to be quite accurate at first, that appellation stuck with me. It was actually quite fitting. I had, in fact, mixed a few layers into that filling. I had no idea what the final result would be. While it baked, I could simply cross my fingers hoping the flavors would come together beautifully. There was no reason for them not to. After all, I had not chosen the ingredients in my filling at random. Far from that. I had made sure the flavors all belonged to the same family, and chosen to stick with citruses.  I was sure they would complement each other well. And they did so beautifully. Just like I had hoped.

The pie featured a flaky crust that was impregnated with the fruity filling but still flaky enough. I had garnished it with tropical almonds and folded its edges onto a mixture of my homemade bitter orange curd and citrus jam. During the baking, the jam bits melted into the curd that acquired a wonderful gelatinous texture.

Using that bright sour orange curd, I had prepared an even brighter citrus dish. One that made for a cheerful potpourri citrus pie. The best part? All the fruits came from our fruitful orchard. Our lakou lakay as I like to call it. 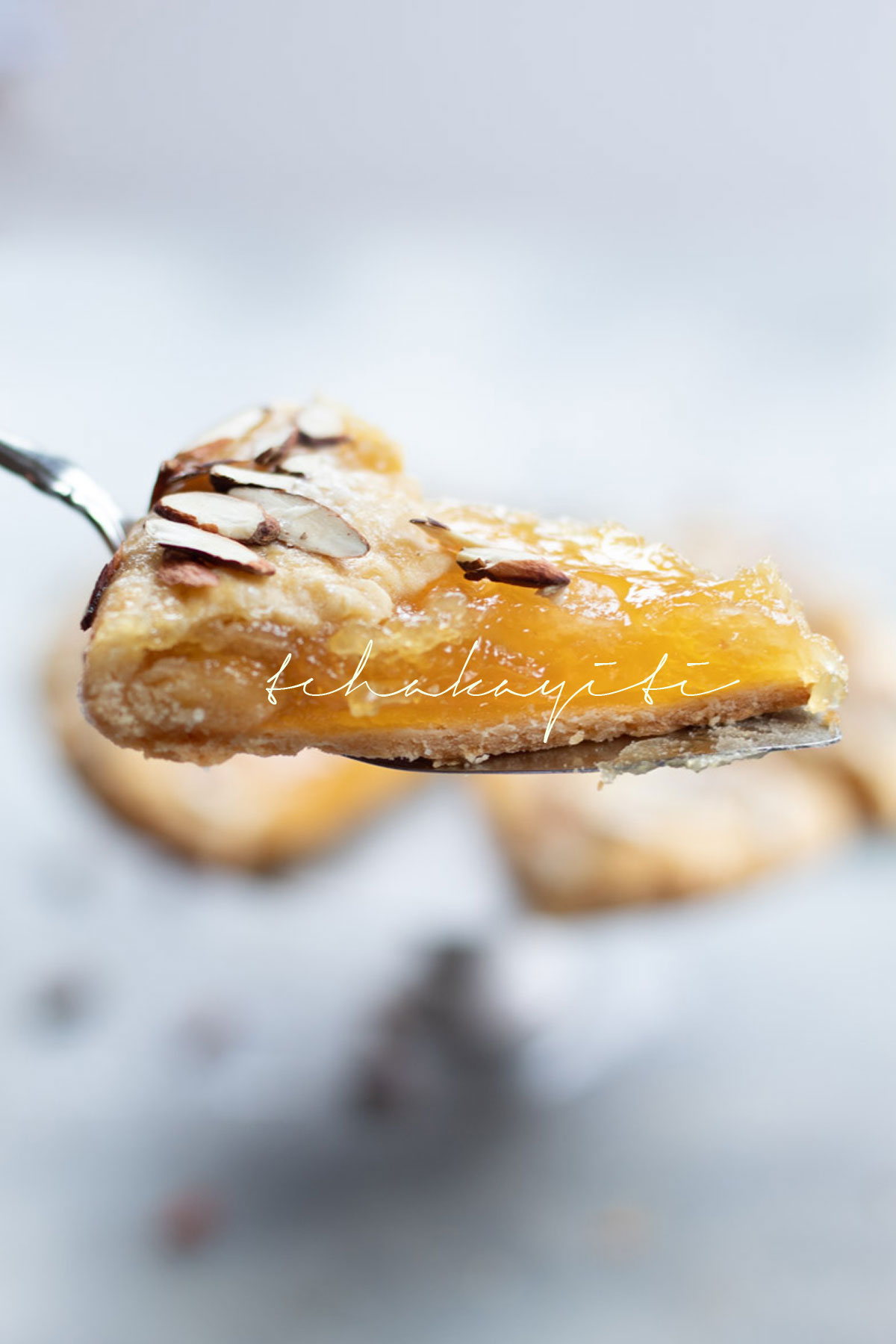 This citrus pie is a mixture of my homemade bitter orange curd and citrus jam. The ingredient list may seem daunting, but it's quite easy to prepare. The reason it looks this long is because I am guiding you through preparing your own jam.

For the citrus jam

For the citrus jam