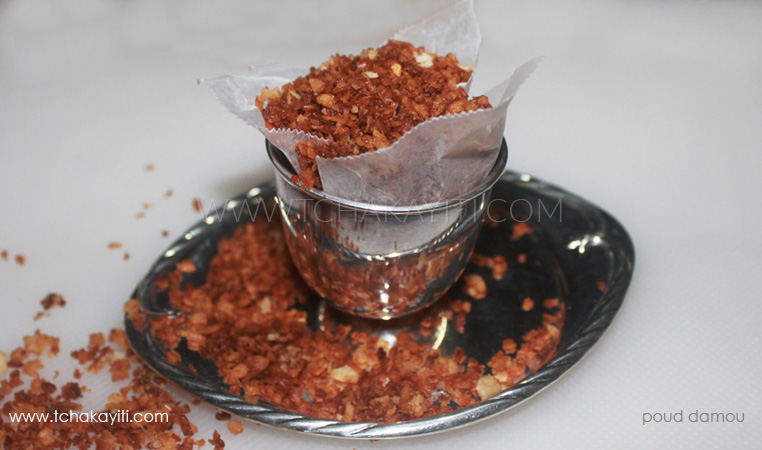 Imagine yourself discovering a snack called poud damou, powder of love, on a playground when you were 8 or 10 years old. Wouldn’t you find that name dreamy? Wouldn’t you be filled with joy at the thought of being able to not only enjoy something with such a powerful name, but to actually be allowed to buy it with your weekly allowance?

I was that child in Elementary school. I believe I discovered this magical love potion when I was in the third grade; I was about 8 at that time. Just like I enjoyed my chanm chanm, the poud damou quickly became a playground favorite. I was beyond happy to be able to eat it and make up stories about it with fellow classmates.

I am not embarrassed to say that, back then, my classmates and I truly believed our beloved poud damou held some sort of power, and would mark our future forever. Every time one of us bought a small packet from the school vendor, it gave us a chance to come up with a new theory about what its name could actually mean and what change it would bring to our lives if we ate some on a regular basis. My favorite theory then was that that poud damou would bring us a life filled with love and would eventually put us en route to meet our Prince Charming that we dreamed of so often at that young age.

Today, 20 something years later, I must tell my 8-year-old self that, unfortunately, this powder holds no such magical power and that its name remains a mystery. I will tell you this though: I have come up with a new theory about its implications.

See, there is something particular about this coconut snack. Even though it is prepared with what seems to be a bland version of the coconut – our poud damou is made with the remnants of the coconut flesh from which we extract all the juice to make the famous coconut milk that is at the basis of so many of our recipes – this poud damou is quite scrumptious; so scrumptious in fact that it has the magical power to bring joy to your palate and put a smile on your face on any given day.

At this point, I am pretty sure I can guess the confused look on your face. What distinguishes that poud damou from regular toasted coconut? Well for starters, it has a different texture since it is made from desiccated coconut flesh. And second, you will be surprised to find out that that seemingly juiceless and tasteless nannan actually develops a strong coconut aroma and flavor as soon as it is toasted with some sugar and a knob of butter. Try it for yourself next time you make some coconut milk. Instead of tossing the dried out coconut flesh, repurpose it. Make your own poud damou.

With that said, while I may still be uncertain about the origin of the name poud damou, my revised grownup theory and the most plausible one I have come up with to date is that it reflects the fact that this toasted coconut snack is quite heavenly.

Some people will probably try to tell you that the poud damou is simply some toasted grated coconut. However, fresh toasted coconut and poud damou simply do not taste the same. For a successful poud damou, you should thus use what is left of the grated coconut once you have extracted its juice when making homemade coconut milk.