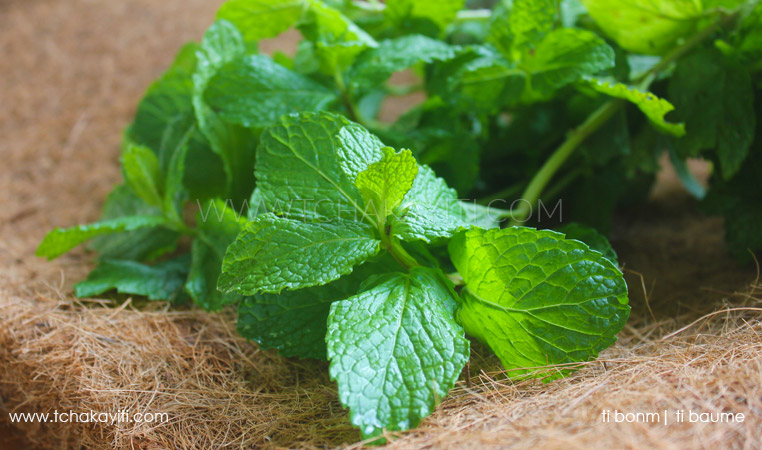 At least that’s what my dad would tell you!

Yes, my dad has his share of natural remedies: sugarcane to soothe his sore throats, and ti bonm to alleviate his colds.

I grew up drinking this herbal tea because it was one of my dad’s favorites when I was a kid, and it naturally became one of mine as well.

Back then, the minute he grabbed his single-serve tea maker, I could tell he was catching something, and that the members of our household should probably stay away from him so as to avoid catching and sharing his germs.

Yet, for me, it was a different story. As a child, I pretty much shadowed my dad. I had to sample everything he was eating or sipping on, including his medicinal tea. I thus always found my way into the kitchen as he poured himself a mug. I would hand him my espresso-sized mug for my share of te ti bonm (ti bonm tea). Whether he liked it or not or had enough tea for his symptoms, he simply had to pour me some or at least let me sample it from his mug for I wouldn’t quit asking.

This habit of his is not unusual for Haitian families. While elsewhere most people drink tea for pleasure much like they would coffee, in Haiti we rely on tea as our alternative medicine. We traditionally drink it to fight illnesses.

Haitians brew herbal teas from their very first symptoms, whatever they may be. Each region and family seems to have its natural remedy of predilection. Many aromatic plants, herbs, fruits and flowers thus find their way into a steaming pot of water to cure sicknesses.

As you may have guessed by now, at my house, when we turn to tea, it is most often to help combat cold symptoms. And, throughout my childhood, our go-to medicinal plant was the above-pictured ti bonm.

A plant, which belongs to the mint family, ti bonm is somewhere between actual mint and peppermint. Personally I think it is peppermint, though some argue that they are not quite the same. Others also speak of it as a treatment for indigestion and cramps, among other things, but I’ve always had it for cold symptoms only.

One thing for sure is that ti bonm conquered my young palate from an early age. Sick or not, I enjoyed its strong minty taste especially with the added sweetness of brown sugar. When I was actually sick, I sipped it even more. With its strong aroma, the ti bonm tea would soothe my stuffy nose and help relieve my cold symptoms in no time.

Today, I drink less of it for we no longer have our mint herb garden. I, however, still enjoy my ti bonm through many local dishes. As a member of the tea family, it is a great aromatic herb that adds wonderful flavors to our Middle Eastern inspired recipes including stuffed grape leaves called mèchi, which recipe I have previously shared with you, and Haitian-style kibby (kibbeh), a dish made of couscous, ground meat and seasonings that should find its way on this blog and tantalize your senses soon.

In the meantime, I will work on recreating our ti bonm garden. The above picture is of a bunch we received as a gift from our gardener who brought us some freshly handpicked ti bonm with roots in hopes to help us bring our herb garden back. I am hopeful that it will grow quickly, and that soon, I will be able to explore and share more ti bonm infused recipes with you.