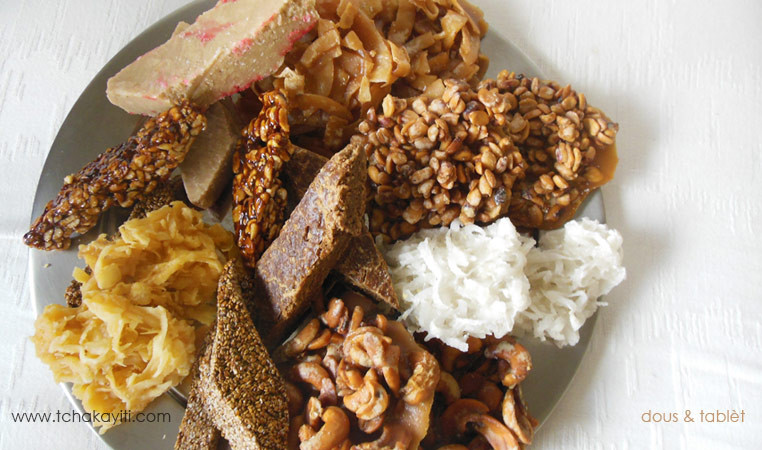 This plate brings back souvenirs of brown bags that dad would bring us home from downtown when he went to Portail Saint Joseph around a public market called Marché Tête Bœuf.

The reason it evokes a brown bag is that these goodies were typically packed in one of those, and the mere sight of a brown bag was enough to stir some excitement among us kids. It was the sign that dad had brought us these sweets back. Indeed, they were filled with all sorts of douce (dous in Creole) and tablette (tablèt in Creole) – I will explain what they are further down – including dous lèt (milk), tablèt pistaches (peanuts), tablèt noix (cashew), dous pistaches, tablèt roroli (sesame seeds), kòk graje and other sweets that are for the most part featured on the plate below.

These Haitian goodies, as many refer to them in English, were most often mixed in the same bag but were also sometimes isolated from one another in smaller brown bags that kept them from sticking to each other as they could easily melt under our hot Caribbean sun. 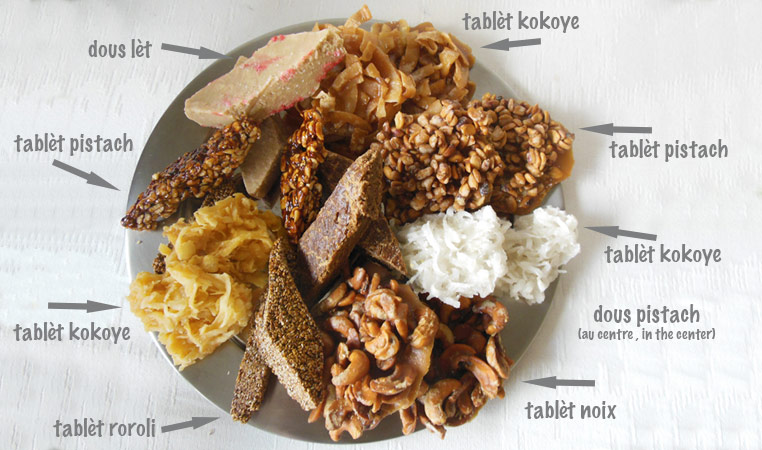 We each had our favorite douce or tablette and therefore always opened the package as soon as we laid eyes on it to search for “our” dous or tablet. Most of the time, we were happy with the content as the bag almost always included enough to satisfy our appetite for these sweets. When we pouted, which was rare, it was because we didn’t think they were evenly split or that one flavor had more pieces than the other. But we never failed to receive our special piece.

My favorite of the bunch were the dous lèt that I ate slowly over a long period of time. I must confess that I never really bit hard into them. Instead, I often simply scratched the dous against my teeth and let the small bits melt in my mouth. It was my own tactic to make them last longer. In Haiti we would call that « fè lasisine. » I did it with such care that I almost always left my dental imprint on my piece. I am almost certain I did it intentionally to make sure I would find my dous when I came back for it.

As soon as my share of dous lèt was over, I went for the tablèt noix and sometimes the kòk graje, which unfortunately isn’t featured in the picture. If memory serves me right, the tablettes aux noix were my sister and mom’s favorites. My mom would take out the cashews one by one removing the sugar that bound them together before eating them. She claimed they were too sweet so she had to take some of the sugar out.

I went from one douce or tablette quite often as I took time to sample each and every one of them when I was done with my share of favorites and still hungry for more. Though I sampled most of the bag’s content, there was one tablette that I avoided at all cost: the tablèt roroli. I simply didn’t like the strong taste of the cooked sesame seeds. To date, I haven’t made peace with it.

For those of you who don’t know, douce and tablette are either fruit or nut based, except for my dous lèt made with milk only, and cooked in syrup to which milk can be added. What differentiate them is that the douces are made using juice whereas the tablettes are prepared with the fruit itself, which can either be cut in pieces, slices or grated like the ones featured in the picture.

The most popular fruits and nuts used for these are coconuts, pineapples, cashews, roroli and peanuts. Below you will find my short version of the associated douce and tablettes. This list is probably incomplete. I hope my Haitian readers will help me by providing their own list of favorites.

Coconut based: dous kokoye, tablèt kokoye, kokoye ak anana (coconut and pineapple), kòk graje (grated coconut). The above picture featured different versions of the tablèt kokoye, the difference is both in the syrup and whether milk is added to the mix or not.

Milk based: dous lèt, dous makòs (made with concentrated milk, this dous, which is originally made in Petit-Goâve, includes five layers of different colors and ingredients including chocolate).

I also promise to soon share my great grandmother’s recipe, which, according to my mom, is the best douce she’s ever had. She calls them affectionately « dous manmie.»