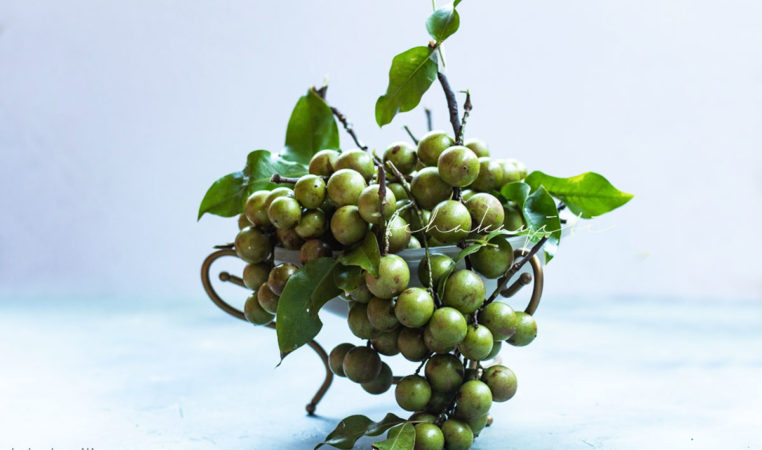 Voyage to quenepes country… You are certainly wondering which country I am referring to in the title. This blog is after all about Haiti’s gastronomy and cuisine, so why this particular distinction?

Jacmel, city in the South-East Department of Haiti, always comes to mind when I think of quenêpes, a fruit known as Spanish limes elsewhere. I don’t necessarily link the two because Jacmel is the main area where this fruit is harvested, but because I have precious memories of the ones I enjoyed there when I first visited the area.

I was about 9 or 10 when I discovered this city or peyi as some would say here when referring to their hometown. It was the first time I was leaving the Port-au-Prince city limits. I spent the entire road trip standing behind my dad’s truck, with the wind blowing through my hair. A real adventure for a nine-year-old. I don’t remember all the details of this trip, but I do keep a precious and sweet memory of that day.

This is the town where I discovered how fleshy and juicy « la douce qui vient » (the sweet that comes) – as our street vendors yell out today in Port-au-Prince to grab buyers’ attention. I remember my family buying a bag full of enormous quenêpes, which we started eating on the city’s main square and ate throughout our drive back to the capital.

They were big, fleshy, juicy, extremely sweet and melt-in-your mouth quenêpes. All I had to do was pop one in my mouth for the yellow-orange pulp to detach itself from the seed and its juiciness to fill our mouth. That was a first for me, as quite often, this fruit’s flesh tends to stay stuck on the seed which one has to suck on for a while to completely detach it and thoroughly enjoy its pulp. I had never experienced such exquisite quenêpes before. Please note that the juicier the fruit is, the more the flesh, which can sometime be acidic depending on the harvest, tends to melt in one’s mouth.

That day, I also discovered quenêpe “marassa”. In Haiti, this term is used to refer to quenêpe which seed is split in two. As children, we were fascinated by this discovery especially given the fact that each of the split seeds had a flat side that allowed them to fit in the same green outer shell. Needless to say that it led to a competition to see who would find more marassa, and that the quenêpe thus quickly disappeared as we ate as many as possible in search of the twin ones.

Such was my first adventure in Jacmel, the city that quickly became a reference in my mind for quenêpes. To this day, I keep a sweet memory of that Jacmel harvest. Every summer, I anticipate the month of August during which the quenêpe season is at its peak, and this fruit thus fills our street merchants’ baskets. We buy as many as possible when we don’t receive freshly picked ones from an acquaintance’s homegrown tree.

I must confess that I eat so many quenêpes yearly because, somehow, the child in me is still seeking the juicy melt-in-your-mouth ones I had so happily discovered in Jacmel that day.