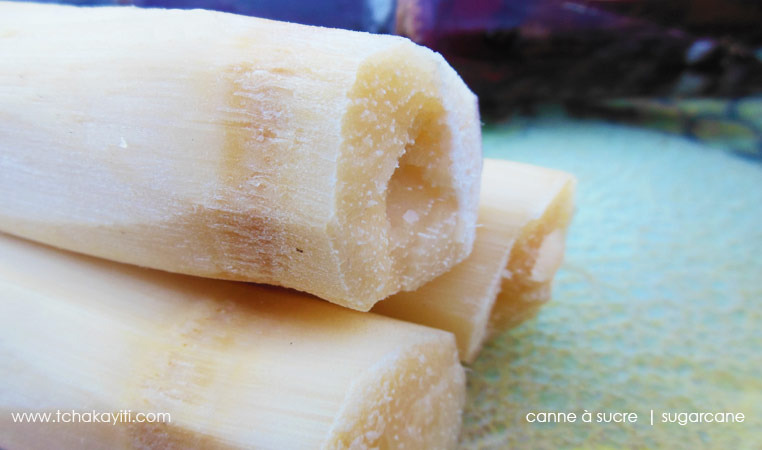 This was a sentence I heard repeatedly throughout my childhood when my dad brought home sugarcane. He would buy this fruit sold on the streets whenever he felt a sore throat coming.

Indeed, my dad swore that these juicy sugar sticks that we sucked on with such happiness were the best remedy against a cold. Was it a myth or a reality? I am not sure. We didn’t really take him seriously. We made fun of him when he made those claims and we still do.

This does not mean that we were not happy when he brought some home, however. On the contrary, I think we all actually secretly wished he could have a sore throat on a regular basis for that would mean we would eat sugarcane very often.

We were so fond of this fruit that we even shared it with my little brother when he was a baby. Indeed, at 10 months, he already ate sugarcane, a fact that gave us quite a scare once. As a 10 month old he actually swallowed a piece of sugarcane without choking on it. Yes, you read right. My little brother who was just a baby actually gobbled up a piece of sugarcane calmly without us even being aware of it.

Had he not been caught on camera by my dad that day, we wouldn’t have known. We didn’t notice it until dad played us the video and my sister yelled out “wait, he didn’t spit out the piece of sugarcane!”

I still remember the shocked look on my parents’ face as they watched the movie over and over and unsuccessfully checked my smiling little brother’s mouth and clothes and patted the bed sheets in search of the piece he should have spat out. They never found what should have been the remnants of the sugarcane he was eating, which led us all to the conclusion that the baby had indeed swallowed that piece of sugarcane without choking. To this day, nearly two decades later, we still don’t understand how that was possible especially since we actually cough when we swallow a tiny chunk of sugarcane by accident.

Could the reason he didn’t choke be that dad is right and sugarcane is indeed a remedy for a sore throat as he so stubbornly claims?