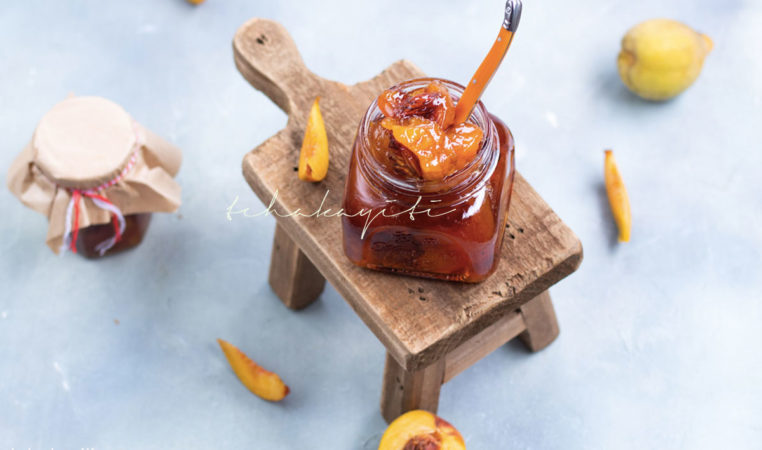 What do you do when you have too many peaches? Why, you make a homemade peach jam of course! And if you are Haitian, you freestyle that recipe!

Two weeks ago, I was scrolling through my Pinterest feed when all of a sudden it hit me that it was peach season. How could I have missed it if we have a peach tree in our lakou lakay, is what you may ask.

Well this year, this peach tree chose to go on a strike.

The reason? Yet to be determined. Without any notice or logical explanation, that tree decided not to delight the birds and us with its juicy and sweet yellow green fruits that we so fiercely fight over year after year.

Had it not been for a friendly neighbor who bought me a full basket at the public market, I probably wouldn’t have eaten one Haitian peach the entire season. Nor would I have had the chance to share this peach jam recipe with you today. 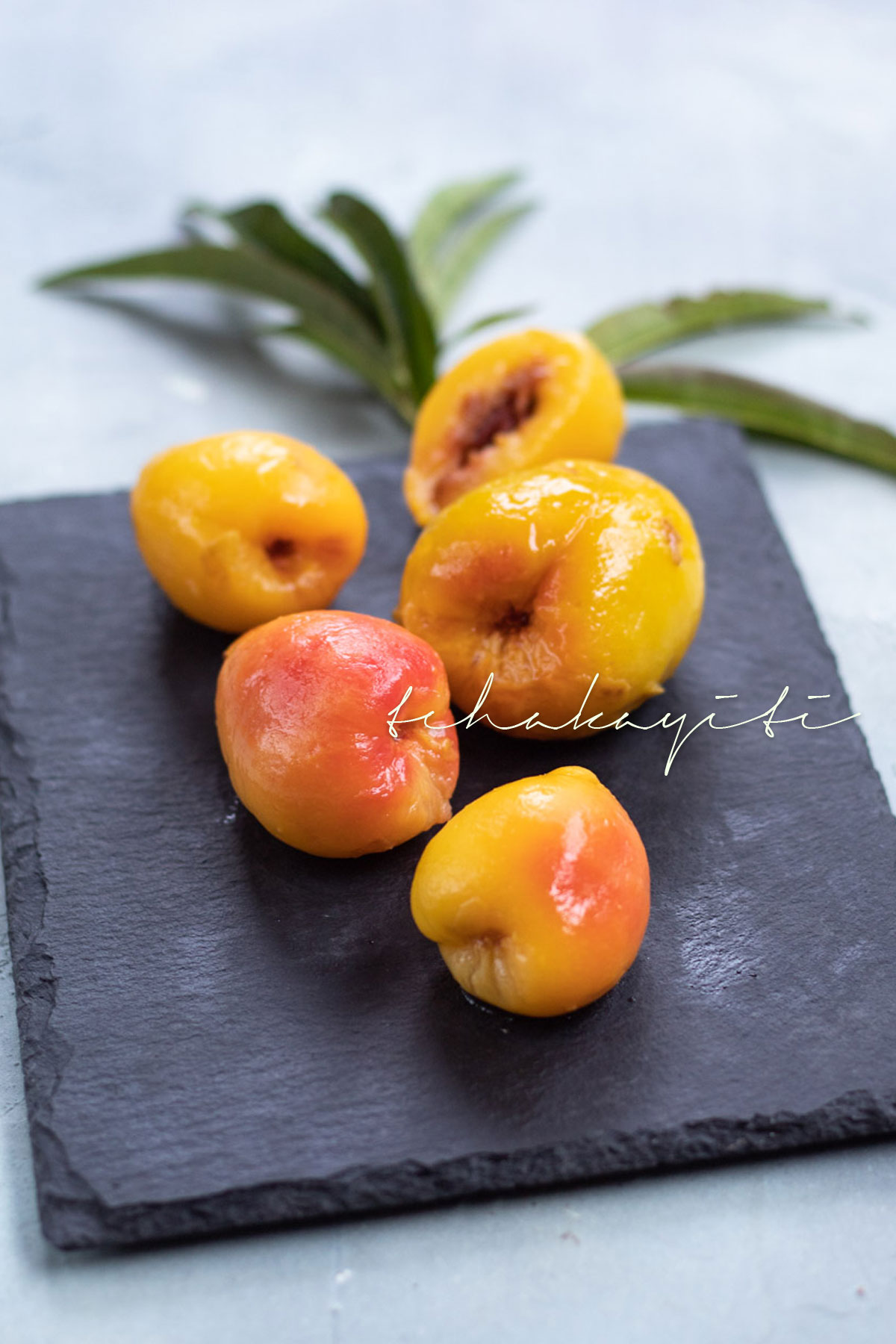 My peach jam making experience was quite the adventure.

True to my roots, I decided that an actual recipe with proportions was out of line. I am Haitian after all, and us Haitians, we cook with our heart and taste buds. Plus, I would be making a small batch, and the recipe I had on hand was calling for pounds of fruits and sugar. I thus decided that that recipe was inappropriate. My chosen course of action was to simply read said recipe for inspiration, skip the proportions, and use my love of cooking and taste buds as guides.

Now you probably want to tell me “slow down now, there’s no way you could use your taste on this one. Don’t you know that hot syrup will burn your tongue!?!” Oh I know that too well. But worry not; no tongues were harmed while making this peach jam. I used my eyes and a spoon on this one. Though I have been unsuccessful tempering sugar in the past, I knew that a coated spoon was a sign of a successful syrup. Plus my sister also mentioned that the bubbling would confirm that I was on the right track. My tools would thus be work. 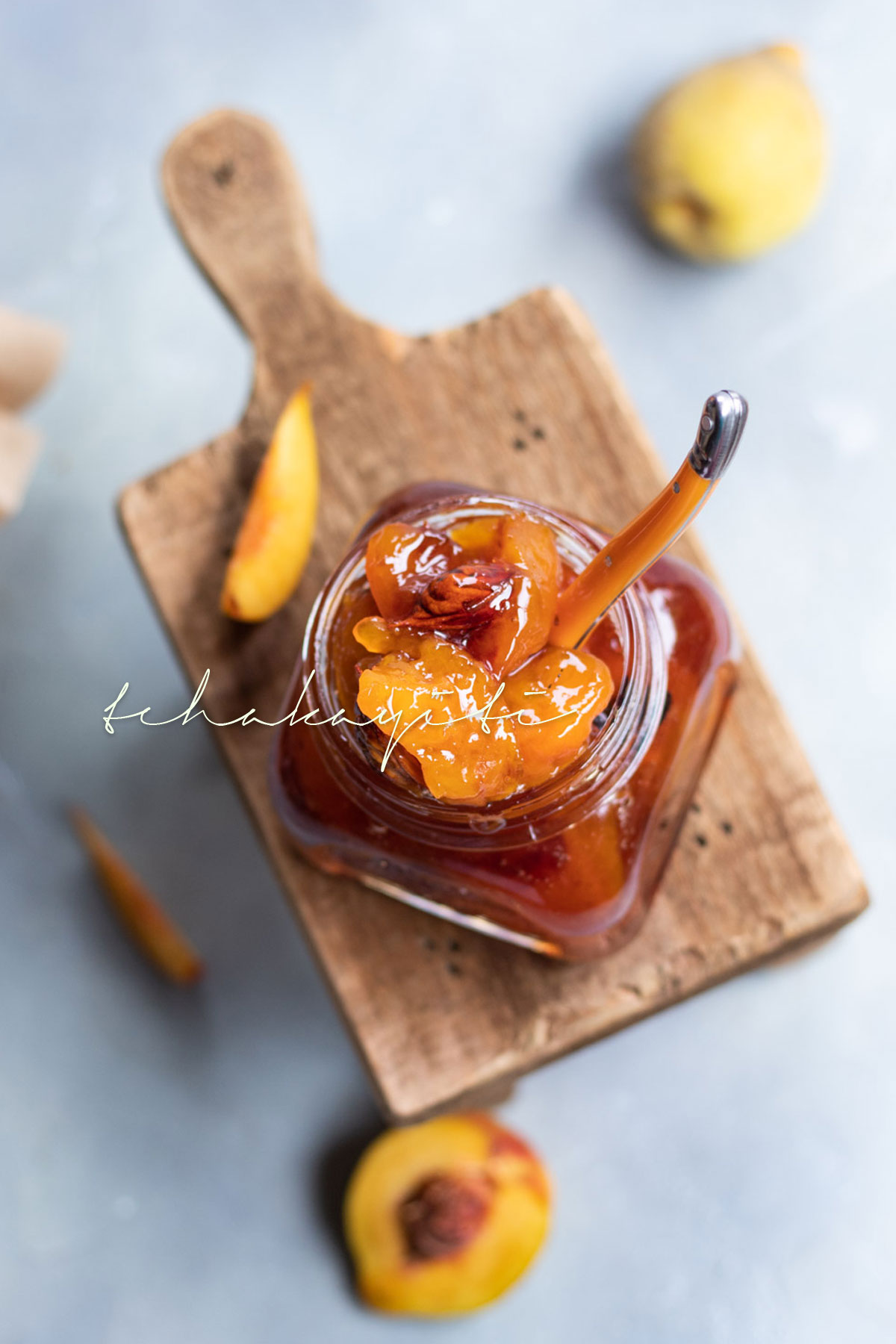 Armed with that knowledge, I went on with my crazy sugar tempering process.

When the syrup didn’t coat the spoon or the liquid turn bubbly, I simply added more sugar. I started with three spoonful, and when that didn’t work about half an hour later, I added three more, working my way to about four or six additional ones about an hour into the process before hitting jackpot.

It had taken about 10 to 12 spoonful for my jam to go bubbly and coat the spoon. But it had happened. I had prepared my very first batch of jam without assistance. And it was quite a success, so much so that I had to hide the peach jam in the fridge to make sure I would be able to snap a picture for this article.

Moral of the story: When the first spoonful of sugar doesn’t work, just add ten more 😀 Worry not, the recipe below features proportions 😉

This recipe was first published on July 15, 2016. I updated it on June 9th, 2019 with new pictures and more detailed instructions

This is a two-step recipe. You must first cook the fruits and peel them before turning them into a jam
Prep Time 15 minutes
Cook Time 45 minutes
Total Time 1 hour