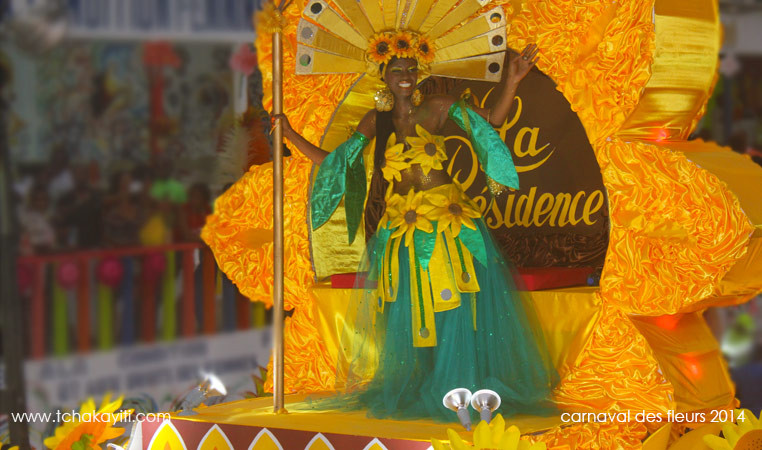 This week, instead of serving you the flavors of our local Haitian cuisine and gastronomy only, I am taking a cultural detour and serving you a list of food items filled with Haiti’s musical flavors and rhythms.

The reason? I just got back from three days of dancing, singing and letting loose at our Third Annual Carnaval des Fleurs. Similar to our regular Carnival, which happens during Mardi Gras, Carnaval des Fleurs (Carnival of Flowers) is pretty much our summer musical fest, if one can call it that way. These three days of letting loose are rich in color, artistic creativity and musical rhythms which include compas, our traditional music, “rasin” rooted in voodoo traditions, and variations of what we refer to as creole rap and rap & ragga here in Haiti.

During those three days, thousands gather around the Champs-de-Mars (downtown Port-au-Prince) for no less than ten hours daily to watch parades, dance to the rhythm of “rara” marching bands performing mostly with makeshift instruments, and of professional musical floats fully equipped with instruments, people and a generator to keep everything going.

What would this menu be without a mention of the many foods consumed during those three days? Ten hours spent on a stand or walking around in high heat in the middle of a crowd of thousands at a festival can only mean two things: lots of drinking and eating to maintain one’s energy, right?

After all, no one can really survive ten hours without eating, especially when waiting is such a big part of the celebration. Indeed, the official musical floats come sporadically from about 10:00 (if we’re lucky) or 11:00 pm until the wee hours of the morning. This year, on the last day, the party kept going until about 6:00-6:30 in the morning, on a workday might I add. I still can’t quite understand how those who stayed this late, or should I say this early, made it to work afterwards. I myself was in bed by 4:30am and, yet, still wasn’t fully functional until about noon.

But let’s not defer the foods any longer. These three days are a threat to everyone’s diet. From chiquetaille de hareng (herring type of ceviche that we will soon share on the blog), to acras, bananes pesees and griot with pikliz, marinades (soon on blog) and extra sides to name just a few, I am sure you won’t be surprised to find out that everyone pigged out during those three days as should be expected to overcome midnight cravings and even out the alcohol consumption. Beer, kleren or rum flavored drinks, oddly fluorescent drink bottles, and weird combinations like rum and energy drink mixes to keep one’s stamina up – beware of these combinations that are probably harmful to your health – are quite popular during that time.

The only thing missing to complete this food list are our famous beignets which recipe is featured on this blog. But since beignets are more of a Mardi Gras/Pre-Lent treat, I won’t dwell on it too much. I’ll consume my share of beignets soon; in less than six months actually as next year’s Mardi Gras falls on February 27th , in 2015.

Now that these three days of bad eating are gone, I shall rebalance my diet. I am however thankful to the high heat that most definitely helped me sweat some of it all out.

Hope this small detour didn’t throw you off too much, and that you will come back to read and explore our food blog. After all, I didn’t deviate too much from the food topic now, or did I?