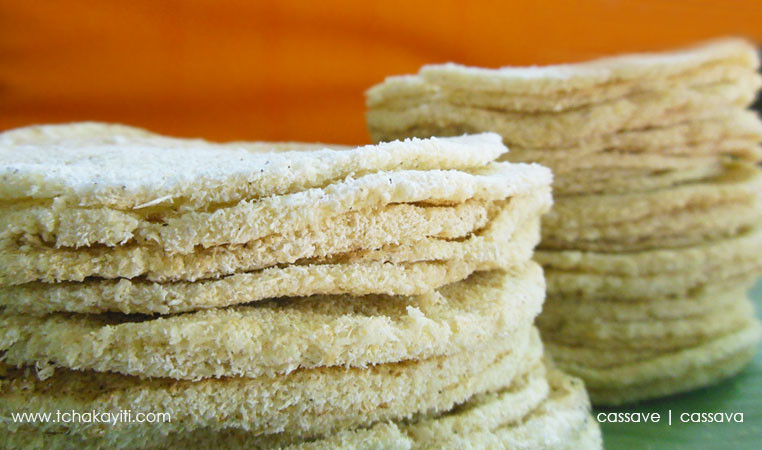 Cassava, the most versatile snack

At least that’s how I feel lately. It seems like I have been on a kasav diet for a couple of months now, ever since I got introduced to Belladere’s kasav to be exact. There are so many ways to eat these particular kasav that I can’t even keep track anymore.

Some of you are probably wondering why I append the city name Belladere (center of Haiti, close to the border with the Dominican Republic) to the word kasav when this snack is prepared in different cities and sold about everywhere in Haiti.

Let me tell you why. Belladere’s kasav are a bit different from the typical ones I grew up eating in Port-au-Prince. They not only come wrapped inside banana leaves, but they look like a stack of face towels and are unusually soft and malleable.

For those who don’t know, kasav (cassava) are made of grated yucca that are dried and pressed in the form of flat cakes. They are either salted or coconut is incorporated in the preparation, in which case they are sweet. Personally I am a fan of the salty version. The ones sold in Port-au-Prince are typically on the crispy side and cannot be folded without breaking even when they haven’t been put in an oven yet. They are sold in plastic bags at grocery stores or as huge sized ones by street vendors, like the ones in Fort-Jacques (hills of Port-au-Prince where I grew up).

On the other hand, Belladere’s kasav are not sold dried, which explains their softness when they are freshly bought. They do need to be left out in the open so they can air dry, however. Otherwise they will go bad, which is exactly what happened to our first batch. Indeed, the first time my uncle brought us Belladere’s kasav back, we were so fascinated by the neat banana leave packaging that we didn’t take them out right away. We were left with inedible kasav that had turned moldy. We learned our lesson, and ever since we leave them out on a tray. They will get crispy over time, but we eat them so quickly that they rarely ever get to that point.

Kassav are the ideal quick snack option, and because Belladere’s version can be easily folded into a sandwich, the possibilities are endless. You can dress them any way you want. All you need to do is pop them in an oven – or in a toaster or in a pan on the stovetop if you are in a hurry – until they turn crispy, adding the topping before or after warming it up depending on how you want to have it. For example, I will add the chiquetaille or butter and peanut butter mentioned above on a hot and crispy kasav whereas I will melt the cheese for some cheesy deliciousness.

I could go on and on about the many toppings that could be used, but I will now turn the conversation to you. How would you eat a kasav? If you’ve never eaten kasav before, let me just tell you that they are said to be healthier than bread and other carbs. So the perfect diet companion.

With so many possibilities, what are you waiting to try them out? You can eat kasav anytime!