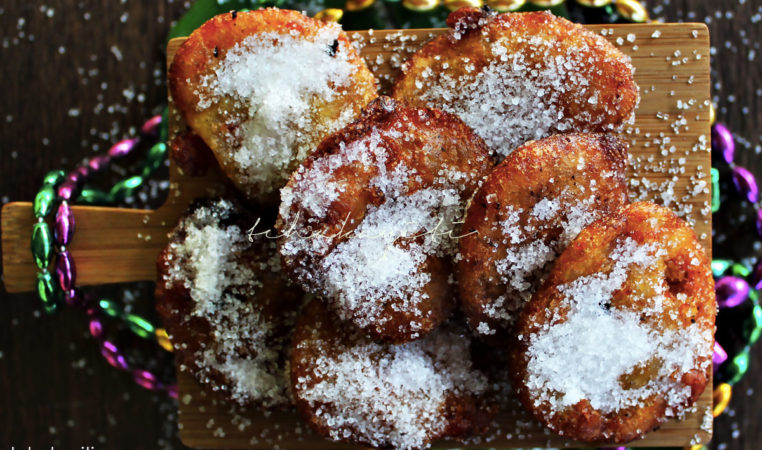 This article was first published on February 26, 2014. I have updated it with an improved recipe.

(What’s going on in the streets, I cannot sleep, it’s carnival day, everyone is going to have fun, jump, laugh or scream, sing, jump with joy…)

My first memory of our Haitian beignets is closely tied to the above song. I discovered both during a costume Carnival party at my preschool.  I was probably four. I spent most of the evening next to the beignet batter, watching as they dropped it by the spoonful in sizzling hot oil.

The mouth-watering smell that emanated from the pot had drawn me in. And I waited impatiently for my turn to have my share, not without skipping the line. I even remember, Dedette, the cook, reprimanding me countless times because I simply wouldn’t get away from the hot pot in spite of her warnings. In fact, if memory serves me right, I repeatedly gobbled up my share of beignets and came back begging for more. That is how my love for beignets began. I have been eating them religiously during carnival season ever since.

Beignets are an intrisic part of our Kanaval tradition.

You won’t easily catch a traditional Haitian family eating them outside of that season. Beignet season begins on January 6th, which marks the official start of the carnival period, and ends at 11:59pm on Mardi-Gras day.

Technically speaking, we must fry and eat all beignet batters before Ash Wednesday. We’re not supposed to eat beignets during Lent, especially not on the first day of the season. That is of course an implied rule we often break. But don’t hold that against us. Our Mardi-Gras day ends around five on Wednesday morning. While dancing, we often fail to realize that we’ve transitioned to the next day. In our mind, Lent begins when we leave the festivities and get home. It thus kicks off around 6 am and not before. Then and only then do we start feeling guilty about eating these treats.

If you’re unfamiliar with our beignets, know that they’re different from the typically puffed fried batter served elsewhere. Our Haitian beignets are flat and banana based. They look like mini crêpes more than anything else, but we mostly eat them for dessert.

Though there are some recipes that call for banana chunks, our traditional beignet recipe calls for mashed ripe bananas and a lot of sweet spices and vanilla. We serve them hot or cold with a generous amount of sprinkled sugar. The longer they sit in that sugar, the better they seem to taste. They acquire a nice crunch all the while retaining their smooth texture.

They’re definitely a must during the entire season. At my house, my mom prepares and fries a new batch every Sunday evening. But we eat them daily through the three official days of Kanaval.

If one day you attend our carnival, do not hesitate to try our beignets, even if they are cold. A cold beignet eaten on a carnival stand gives as much joy to the taste buds as a hot one. 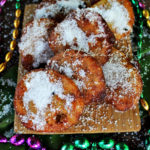 This recipe is the closest one to the beignets you will find on the streets. It calls for water instead of milk, and does not require eggs. I promise they're still smooth and tasty.

You could technically use milk, but then again, should you?