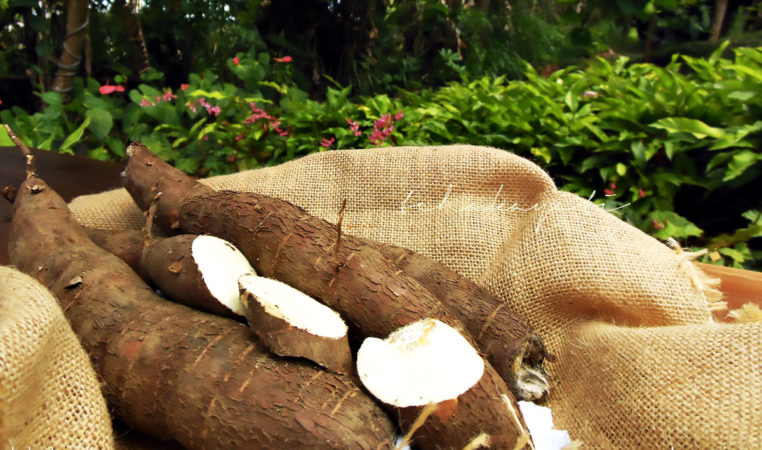 Boiled yuca, mashed yuca, yuca garnished with cheese, yuca fries … yuca at breakfast, yuca at lunchtime, yuca at dinner … A never-ending yuca diet that drives me and my stomach nuts!

Such are my first memories of this root. I was a 16 year old traveling with a group of 400 young people from all over the world. Our first destination was the neighboring land, the Dominican Republic.

There, I discovered this root for the first time. Throughout our stay, we were fed yuca on a daily basis. This tuber was included on every menu, especially at breakfast. I quickly got sick of that repetitive diet.

In Haiti, we do eat yuca. We just don’t have it on such a regular basis. On rare occasions it finds its way to the table either in a stew or as a side dish, a vivre alimentaire as we say here. Never as a main dish.

I believe I can count on one hand the number of times I have encountered this root since my two-week stay at the neighbors’ more than fifteen years ago.

Yet, recently, I was tempted to give cooking it a shot.

My motivation? An #EditionManioc of a cooking contest organized for one of my clients at i7lab. A contest I wish I could be a part of. A contest from which I am unfortunately automatically excluded.

A chef’s explanation about this choice of manioc further enhanced my desire to be a part of the competition. He portrayed the root as one that can inspire many culinary adaptations.

I was far from imagining that the versatility he spoke of went beyond the fact that yuca comes in the form of a root, flour and cassava. An online search revealed that the root itself is suitable for both salty and sweet preparations. In addition, yuca is as much a dessert as it is a starter and a main course.

That was intriguing enough to convince me that I needed to be a part of that competition even if it had to be in the backseat through this blog. I had to learn how to prepare manyòk, and try recipes I never imagined existed.

It was with a mix of curiosity and skepticism that I decided to devote an entire weekend to this root I had never handled before.

Salty dishes. Sweet dishes. Exquisite dishes. Dishes, which recipe inspirations came from fellow food bloggers. Dishes that amazed and delighted me at once. Dishes diverse enough not to make a 16-year-old sick of them.

Dishes I will now let you savor through pictures.

My yuca adventure began with this cassava pudding, which is not new on the blog. You will find the recipe here.

Note that this time, in a spirit of adventure, I prepared it with cassava that come to us from Jeremie, a city south of Haiti. I also used a mixture of white and brown sugar. It is this combination that gave the pudding its caramel color, a color that inspired the accompanying sauce.

I served my pudding with homemade caramel sauce. 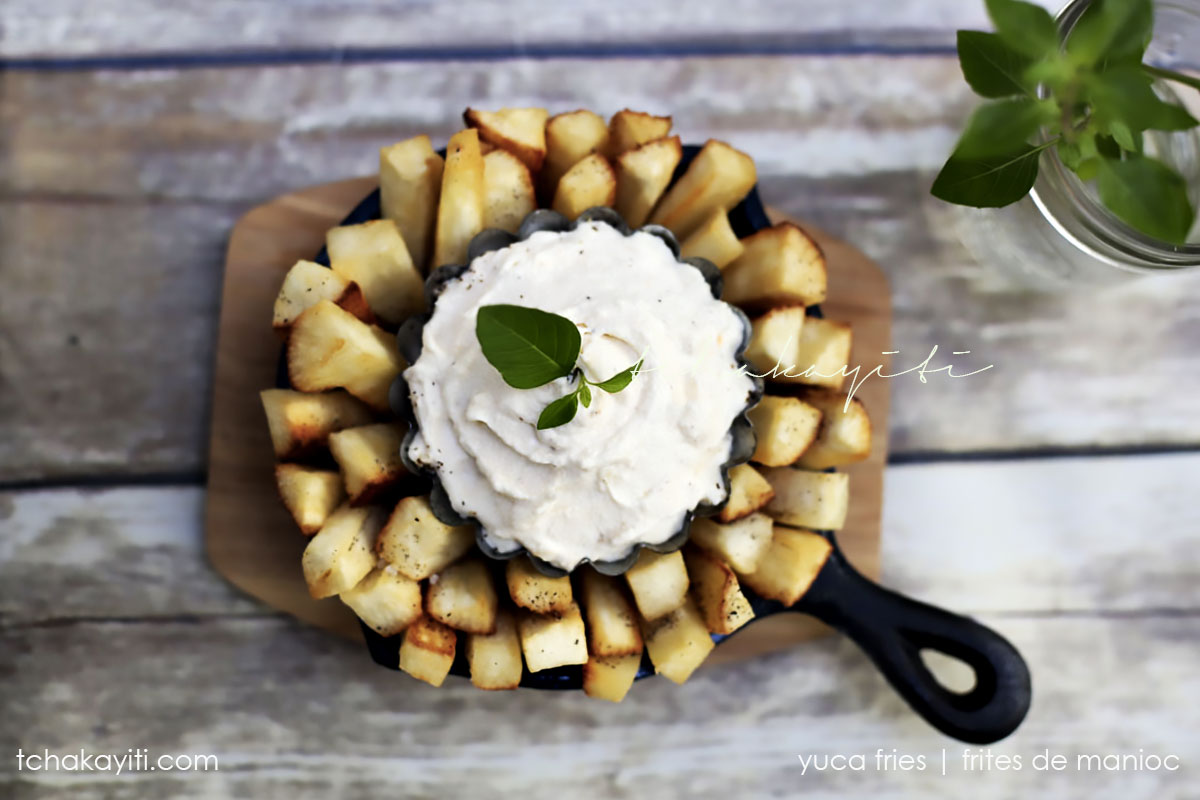 As the pudding would spend an hour in the oven, I took the opportunity to try to cook the actual root for the first time ever. I fried a few cut pieces that I served with a cheese dip. That flavorful recipe awaits you below.

These yuca fries were crispy, crunchy and exquisite. A colleague even wondered why we don’t fry our yuca in Haiti. A question that I now ask myself as well.

The next day, it was time for the two dishes below. 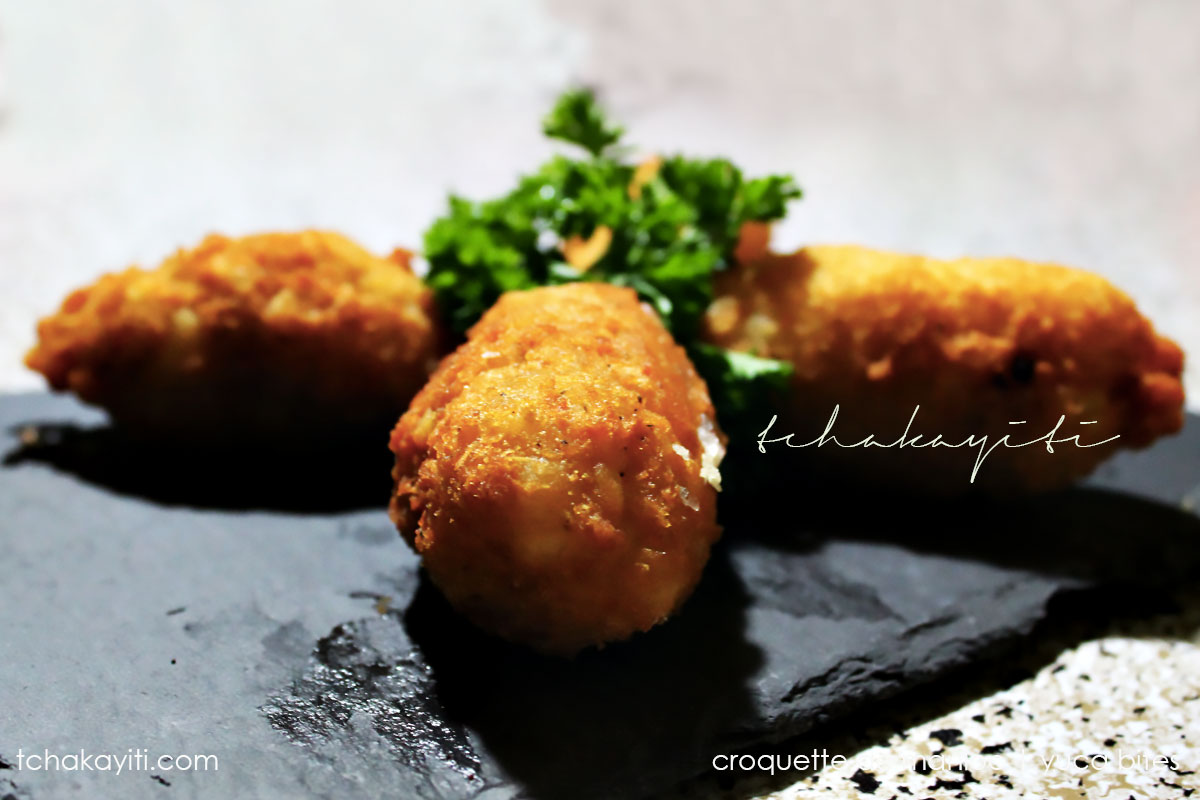 Inspired by these cassava cheese balls,  chulitos, and cassava puffs with sugar and caramel cinnamon recipes, I prepared what I would call cheese and herring stuffed yuca croquettes. I boiled and mashed the yuca into a purée I seasoned with Tête de Maure cheese, salt, pepper, and garlic before rolling and stuffing it with prepared herring. I fried these croquettes in hot sizzling oil. A true delight. 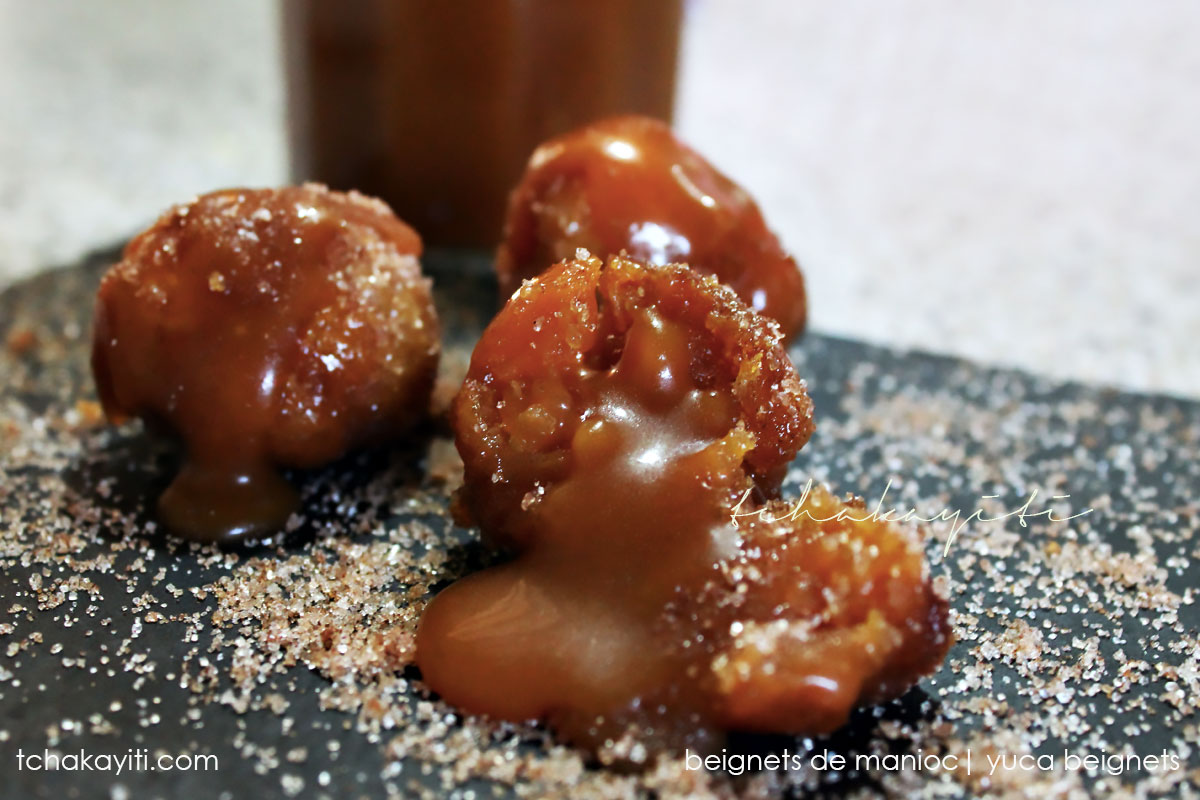 This adventure had to end on a sweet note. Intrigued by the recipe for cassava puffs mentioned above, I prepared what I’d rather call caramel stuffed beignets.

I was pleasantly surprised. These beignets were the most surprising and delightful preparation. I admit having been even more skeptical about this particular recipe than the ones above. I did not imagine that yuca could be turned into a dessert so easily.

You simply roll and fry mashed yuca balls before coating them with a sugar and cinnamon mixture, and stuffing them with a caramel sauce. The recipe is shared here.

The resulting bites are divinely delicious. The next time I prepare them, however, I will incorporate sweet spices and maybe even some caramel in the mashed yuca before frying it. That way the flavors will be enhanced.

With this excursion, yuca conquered me. I discovered a root that, without asking too much, adapts to both salty and sweet culinary ambitions. This adventure marks the beginning of my discovery of this tuber.