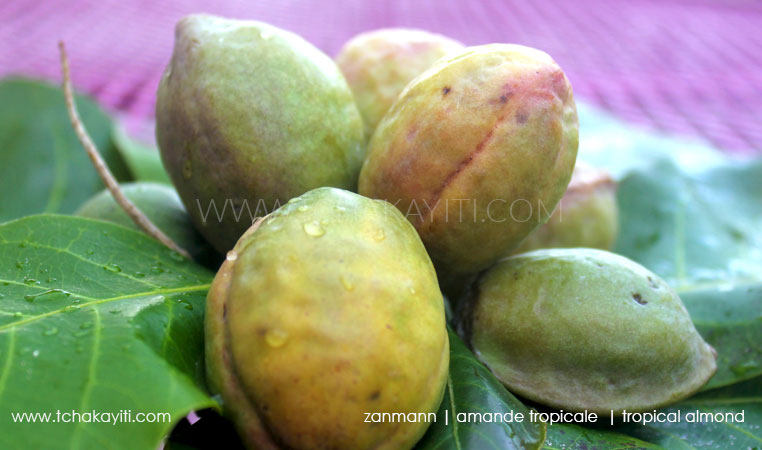 There are two great things about the above-featured fruit: nothing beats a nap under its tree’s branches, and they make a delightful feast. The child in me can tell you a lot about this last statement.

Zanmann have indeed marked much of my childhood and my entire teen years. Those fruits were our favorite pastime, my cousins and I, on the afternoons we spent in the house that was also home to our famous cherry trees filled with fiery ants.

An extremely fertile zanmann tree made our time there quite enjoyable. Its fruits that were mostly accessible from the roof were like a ray of sunshine on our most boring days. We knew the best zanmann were on the higher branches and, thus, often sent the boldest of the group, notably the oldest that were allowed to do so, up the cast iron stairs that led to the roof so they could reach the branches that had the most fruits. They were to bring back tons of zanmann to the rest of the group that did not dare climb the staircase or ignore the adults who had not granted them permission to reach the roof.

These zanmann harvest, had become our Friday “program,” our favorite Friday activity. I can still picture our pockets and our folded uniform skirts that held the fruits of our harvest, a harvest, which, much like the cherries mentioned above, gave us an opportunity to drive the adults around us nuts.

“Wouy timoun nou pral tache rad nou,” – you’re going to stain your clothes, kids – was a song we knew way too well and paid little to no attention to.

Stained clothes or not, our zanmann “program” had to happen. We divided the fruits among cousins and savored their sweet yet tart flesh. We even had a challenge; we were to break the inner fruit shell with our teeth so as to extract its edible core that we called nannan. Those of us who still had fragile baby teeth refrained from doing so, however. Instead, they used a rock to break through the hull. It was a victory when we managed to extract the nannan without breaking it as this part of the fruit does not withstand shocks and is quickly crushed and even pulverized.

During the summer, when we spent more time in Canapé Vert, as we referred to that family house, we also harvested the dried zanmann from which it was easier to extract the core. Rock in hand, we sat on the ground and broke the outer fruit shell to later divide the extracted nannan among us. Needless to say that we had become quite the experts at crushing the shell without damaging the edible center, the almond that is today sold grilled in major grocery stores in Haiti.

For those of you who are hearing about this fruit for the first time, zanmann refers to a local fruit known elsewhere as tropical almond, a fruit that should not be confused with traditional almonds.

Oval in shape and slightly flattened, these tropical almonds have a green edible outer skin that turns yellow with a few traces of pink as the fruit ripens. Under this skin lies a fibrous layer that can be purple or white, depending on the variety, and that covers a hard shell that looks similar to cork, the very shell we broke to extract the sweet almond hidden beneath it.

As I share these stories with you and describe those fruits that marked my childhood, I cannot help but feel lucky to have had such a great childhood at that house. Between the itchy cherries, the coconut trees that were to be avoided, and this “pye zanmann” (tropical almond tree), we had the perfect childhood under the hot sun of my Haiti “Cheri,” my beloved Haiti.