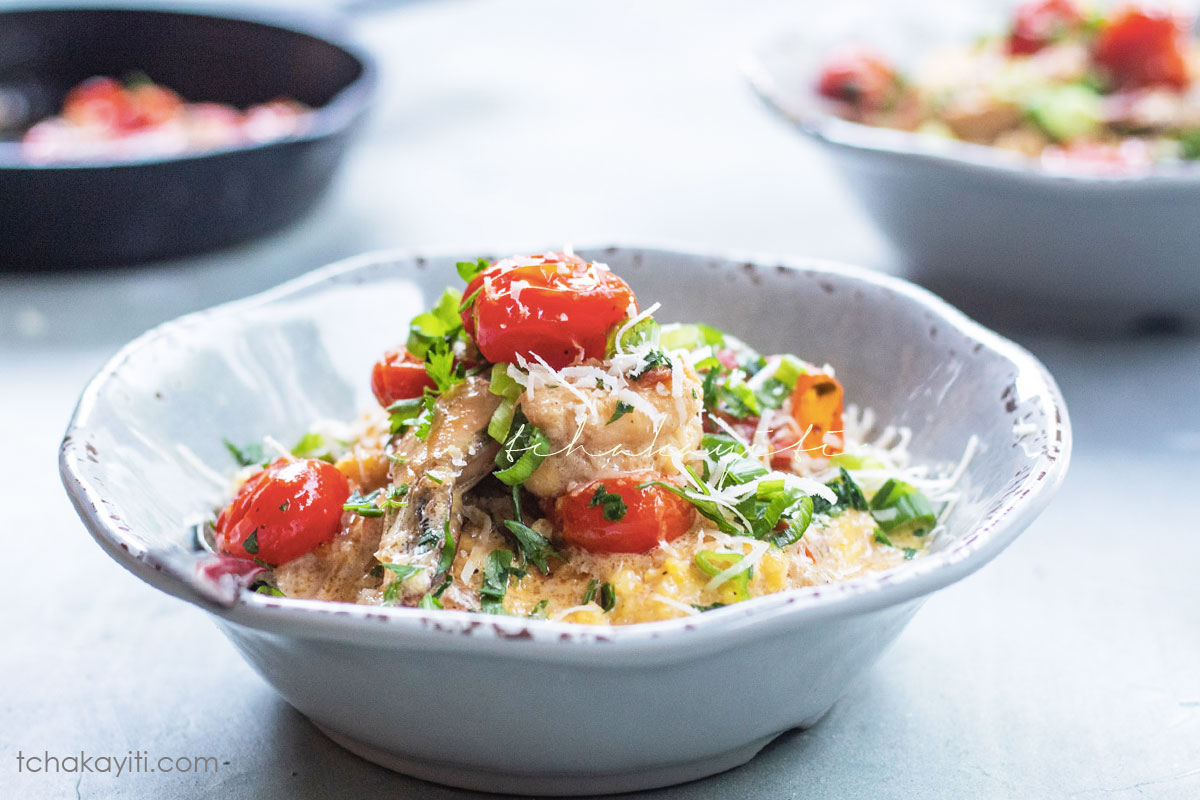 Today’s shrimp and grits is unlike anything you’ve had before. I must warn you, however. It is not quite your typical Haitian dish. In fact, some would say it has nothing to do with our culinary traditions. Though, I could argue the opposite by just renaming it.

See, I am serving you some New Orleans inspired shrimp and grits. I won’t deny that grits have nothing to do with our local cuisine. Yet, if you look carefully into grits, you might find similarities with our mayi moulen. After all, what are grits? They’re in essence a finer coarse polenta. With that said, if I let my inner Haitian speak, I could have simply told you that we’re having mayi moulen ak ekrevis. But I won’t do such a thing. I have to remain authentic. I also need to stay true to the city that inspired this dish.

So, worry not, I will not attempt to convince you that those shrimp and grits are Haitian. I will however argue that the shrimp definitely has a Haitian flair. But before we get into that, let me tell you why I am feeding you this particular dish today. 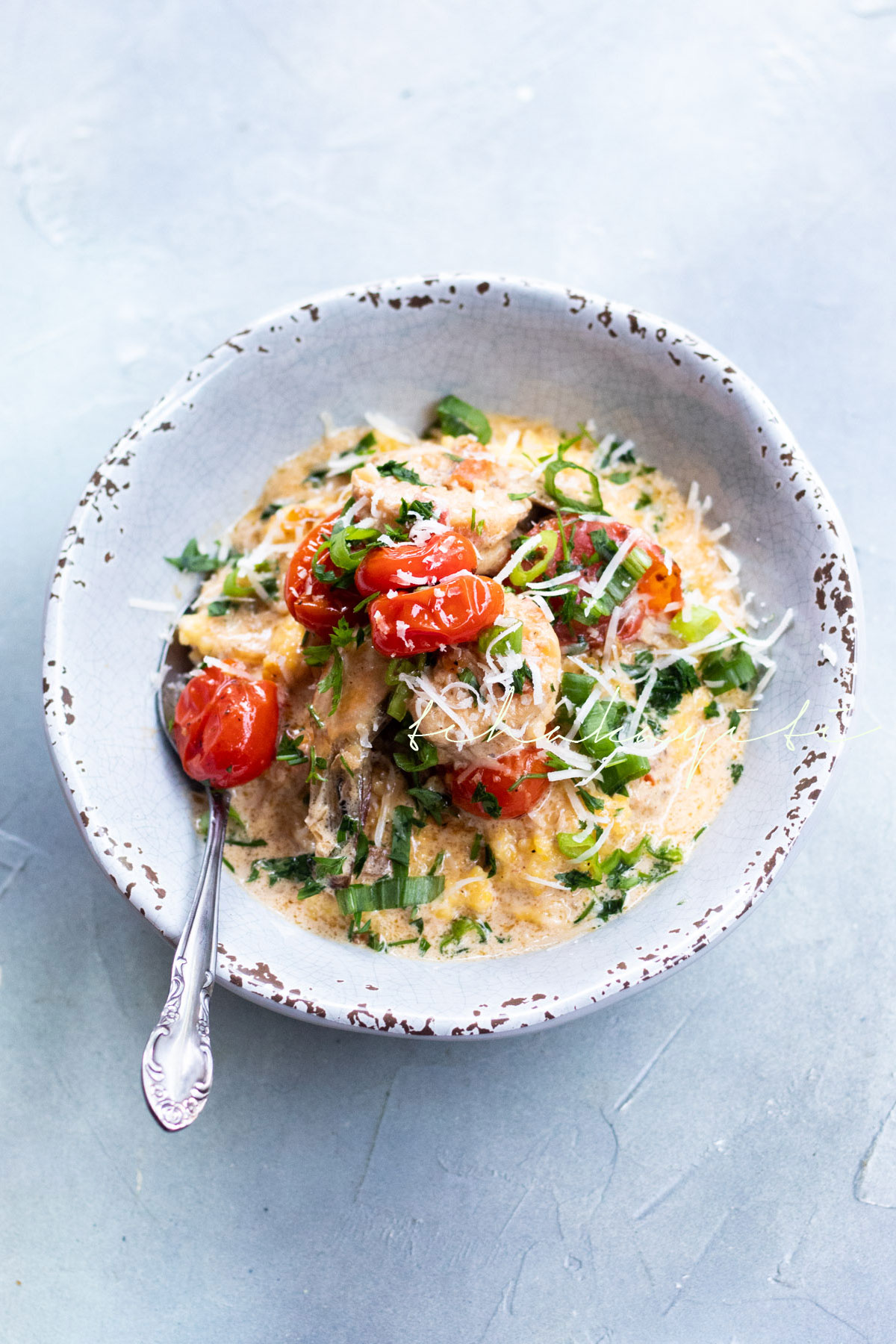 These shrimp and grits are a testimony of my never-ending love story with New Orleans.

There’s just something with that city. I cannot let go of it. With every trip I make, it gives me one more reason to miss it. And this time, it’s the shrimp and grits I had at Surrey’s Cafe earlier this year. That dish was the bomb. It made me acquire a taste for this American staple. And I have been craving it ever since.

So, naturally, I had to indulge in this craving, and prepare a similar dish myself. Only, I couldn’t find a recipe that was quite like the one I had eaten. I, thus, had to take matters into my own hands. Inspired by this recipe attributed to that same restaurant, I decided to prepare my very first shrimp and grits with a twist.

If you’ve been following me long enough, you know I simply cannot follow a recipe to the letter. I have to adapt it to my own taste. And that is exactly what I did with this one. I’d like the say I prepared it with a Haitian flair. Indeed, I made quite a few tweaks to the base recipe. I had no Louisiana beer at hand. I wasn’t sure I wanted beer flavored shrimp either. So, I substituted an extra brut sparkling wine for the beer. I also knew I wanted a creamy sauce just like the one I had sampled at that café. I created that velvety texture with a splash of cream. 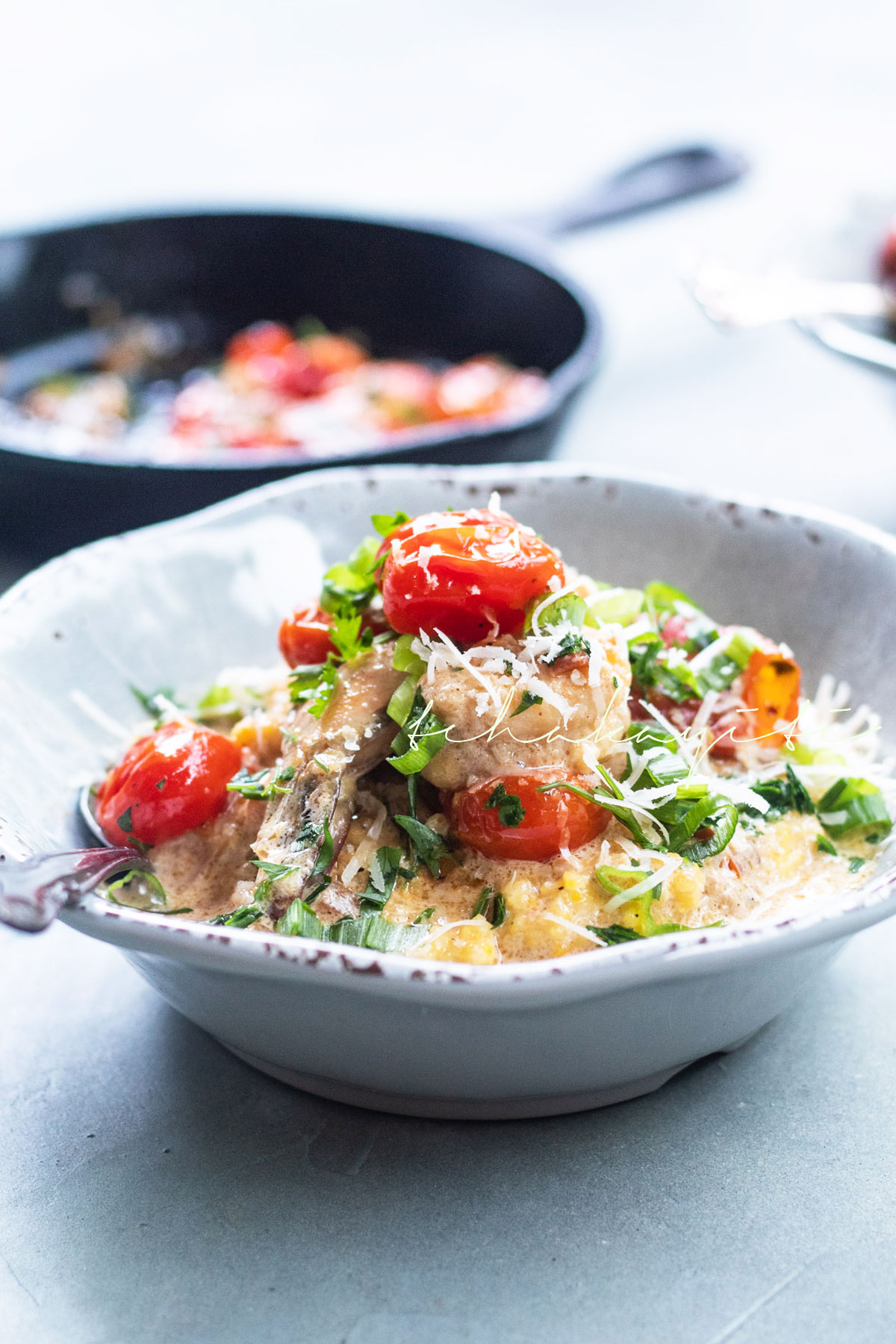 Simply put, I drowned my shrimp in the most divine creamy wine and tomato sauce I ever prepared.

One that surprised everyone, including myself, with its wonderful depth of flavors. It is a sauce that is definitely worth sharing. It is both buttery and creamy. I believe it will pair with pasta or toasts just as well as it did with the grits. It could even make the perfect standalone dish. And you could easily substitute another seafood for the shrimp. With that said, let’s forget about the grits. Today, though I am serving them atop an American breakfast staple, I am truly simply serving you my amazingly versatile creamy wine and tomato infused shrimp à la Tchakayiti.

The secret to this divine sauce is in the wine. Do not use cooking wine, I beg you. Carefully select your favorite bottle and pour it generously.
Print Recipe Pin Recipe
Prep Time 10 mins
Cook Time 20 mins
Servings 4

For the grits (optional)