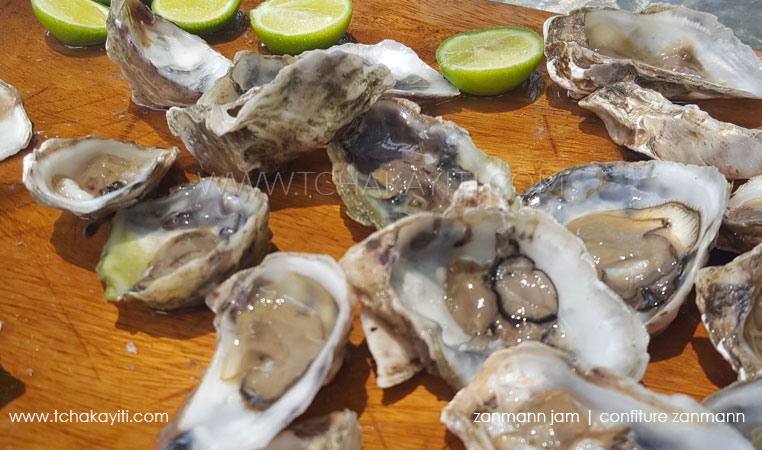 Fresh raw oysters on a beach

“Sluuuuurrrppppp!” That is the sound of dozens of oysters being eaten on a beach on Haiti’s Côtes des Arcadins (coastal area north of Port-au-Prince, the capital).

Yes, such is the sound I associated with this seashell from day one. Just like the ocean emits a sound, the oyster eating process is closely linked to its own melody in my mind – if I can call the loud sucking noise that comes out of our mouths a melody.

The reason for that? Oysters are to be slurped for otherwise their sliminess will permeate one’s entire mouth and be close to impossible to get rid of. At least, that was the story we were told as children growing up and going to the beach in Haiti. Chewed oysters left a slimy disgusting residue in one’s mouth for hours.

I remember being traumatized by that idea the first time I was encouraged to eat an oyster as a child. The mollusk had become undesirable to me, yet I still gave it a shot that day. I had let myself be convinced to put that repulsive seafood in my mouth – that was my perception of oysters at the time – because I had also let myself be told that oysters hid pearls that could only be uncovered by eating their flesh. And what girl doesn’t dream of finding her own fancy pearl?

According to the storytellers of the time, a group that happened to include our parents and the area’s fishermen, we would only be able to uncover those pearls by eating – or should I say sucking and quickly swallowing – the flesh, for the precious stone was hidden under it. Nonsense right? After all, if we had to slurp, there was no way we wouldn’t also swallow the pearl. Such was my reasoning as I got tired of the eating process after just a few oysters. I was too terrified of the sliminess in my mouth for me to dare to even try to test the grownups hypothesis. I couldn’t understand how something that was wet and slimy and to be swallowed as quickly as possible could be enjoyed. I thus kept avoiding oysters for years.

It wasn’t until I moved abroad for college that I made peace with this seafood. It was served on campus and I was reluctant to try it again, but with peer pressure, I gave in once again after all those years not without some bargaining from my friends at the time. Yes at 19, I finally understood that oysters could actually be chewed and were delicious. I also learned that they can be eaten raw and fresh outside of the beach just as long as they are well preserved on ice.

In Haiti, we typically only eat fresh oysters on the beach right as the fishermen bring them back from the sea. They crack them open in front of us, remove any excess sand or other ocean catch stuck to the shell, and hand them to us right away on a plate garnished with slices of key limes. We – yes we, since I now eat oysters – rush like busy bees around the plate which content disappears in a bat of an eye much like our other favorite seashell, conch.

See, fresh raw oysters are that good. They taste just like the ocean. They are cold, raw and with the slightly salty taste of the ocean. Just add a squeeze of key lime to the flesh like we do it in Haiti and take in the flavors. That simple. But to shake it up a bit, add a drop of a Tabasco type of hot sauce. That last secret, I also uncovered while abroad.

Beach, salt, water and hot sauce, all in just one small oyster bite. What’s not to love? Go tell that to my five year old self, why don’t you?