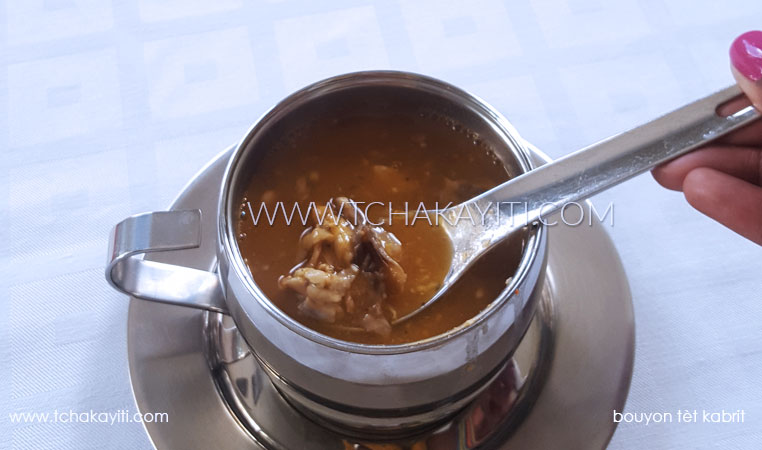 The lively backyard atmosphere they’ve been excluded from fascinates those young eyes. Among the group, a disappointed eight or nine year old girl…

She secretly wishes she were two years older. Had she been that age, she would’ve been allowed into the kitchen late at night, and found a way to sneak out. She would have gotten a peak of what all the fuss was about. She would have finally agreed to sample that bouyon tèt kabrit that was the reason for that fun commotion outside her window; an excitement she didn’t fully understand as that dish did not seem appealing to her at all.

After all, it was called bouyon tèt kabrit, and that name wasn’t just a name as she had discovered earlier in the day.

Throughout the day, a strong and unappealing smell had permeated the entire house. And she hadn’t been able to resist the temptation to inquire about the content of the simmering pot.

Her curiosity had gotten the best of her, and what she had discovered had tightened her stomach. She had refused to give this dish a chance after confirming its name was directly linked to its key ingredients.

At first, she didn’t believe them when they had told her the word bouyon tèt kabrit actually meant that a goat’s head was among the key ingredients. Yet, a peak and a stir of the stew had confirmed that it was the truth. An actual animal skull was used in the broth.

As if that were not repulsive enough, she also found out that the dish included the goat’s tripes and intestines.

Needless to say that this finding had upset her all day long, especially since the stew had a strong and unappealing smell.

Yet, at this late hour, she couldn’t help but feel remorseful as she peaked through that window. Her older sister’s liking of this goat head stew didn’t help her either. If anything, it intrigued her.

How could they love eating something so repulsive?

Perhaps she had been wrong not to give that bouyon tèt kabrit a chance to prove itself to her taste buds?

She resolved to try it the next time they prepared it at her house. And that’s exactly what she did a few years later.

The day she sampled the stew, she finally understood the fun atmosphere that prevailed outside her window a few years back. She had tried a spoonful of bouyon tèt kabrit and had been wonderfully surprised and pleased.

Today, that little girl, who happens to be me in case you haven’t put two and two together, loves her bouyon tèt kabrit.

And she will never forget how she had been denied an invitation to a bouyon tèt kabrit New Year’s Eve party in her own lakou lakay; an invitation which would have probably helped her develop a taste for this dish way earlier.

Note: I hope to be able to learn how to prepare some bouyon tèt kabrit soon so as to be able to share the recipe with you, fellow readers.