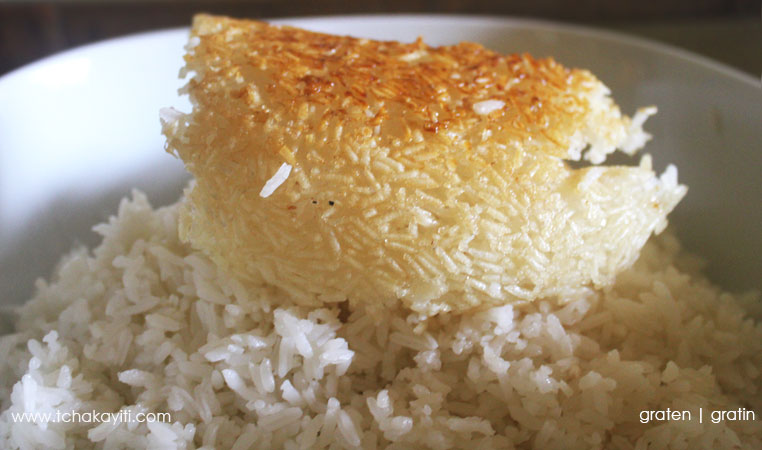 For the love of “graten”

A child sneaks into a kitchen, lifts a lid that’s covering a simmering pot of rice and pours some oil over making sure it drips to the bottom of the pan…

His goal? Get the oil to create a thicker than usual crust of rice at the bottom of the pan, a crust he knows will be served at the family table at dinner time; a crust he knows he will have to fight for since he’s not the only one who enjoys eating it, thus the reason for him sneaking into the kitchen at the risk of being reprimanded and messing with the cook’s meal while it’s on the stove.

The above-described scenario is based on a true story. It is a story my mom repeatedly shared with us to explain her cousin’s mischief throughout her childhood. Like many Haitians, he loved the thick rice crust; so much that he tracked the cook’s every move in hopes of finding an opening to the kitchen where he would work his magic. All at the risk of being scolded and banned from the kitchen.

To him, it was worth the risk. At a young age, he had figured out a way to make the most out of the pot of cooking rice to get more of what he loved about it. He had found the way to “help” the cook obtain his favorite part of the rice, the bottom of the pan crust known as “graten” in our Haitian cuisine. All it took was just a few extra drops of oil added at the last minute of the cooking process.

I should probably mention here that the more graten there is, the less fluffy the rice or corn. This is why it was a risk for him to get caught. His prank, if I may call it that, meant there would also be less food served at the table.

Graten, which designates the part of the food that stays stuck at the bottom of the pan and is later grated off and can be eaten, is a favorite among many local families. Haitians are particularly fond of the rice and maïs moulu graten served alongside the every day menu. They love it so much that some even argue over who gets the most and who doesn’t. Rumor has it some families do a daily rotation.

I myself have very vivid memories of my family arguing over a small plate of graten. The argument was almost always over who had been so inconsiderate to take most of the content of the plate leaving little to nothing for the rest of the table.

As you have certainly guessed now, at my family table graten is also a must. My family either eats it as is or with a couple spoonful of sòs pwa (bean sauce). When it comes to maïs moulu (corn meal), the struggle is real. Just like dad must absolutely have avocado with his maïs, he must also be served a plate full of graten, or else chaos might ensure.

Remember how I told you that Haitians don’t eat without rice? They certainly don’t eat without graten either. So next time you are hosting them, don’t throw away the bottom of the pan crust or leave the food on the stove for a little while longer just to get a thick enough crust that you can grate off and serve.

Truth is, there is never enough graten and there never could be enough to please so many palates at once, unless of course, someone sneaks in the kitchen and makes the rice or corn produce more graten like my mom’s cousin did throughout his childhood.