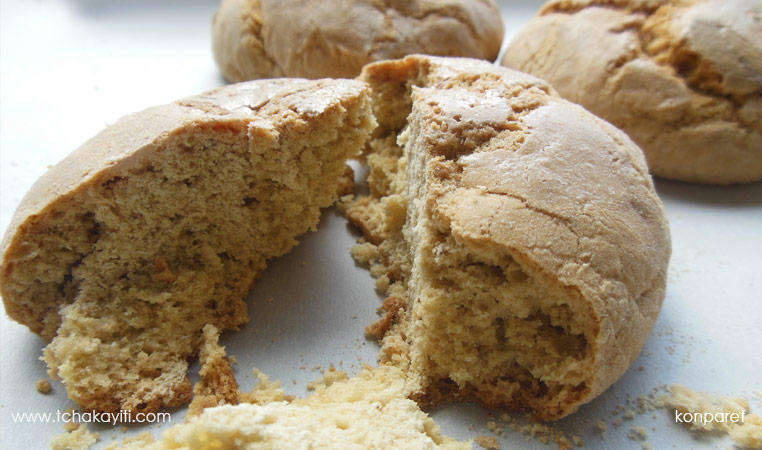 “Konparet, Konpareeeet” is how we yelled out to draw the attention of our « pratik » from the first floor of the building we were located in Champ de Mars. That street seller came our way religously every Saturday as we got back to our parents’ office, my sister, a friend and I, after our weekly English class.

As young as we were, we were probably between the ages of 8 and 12, we were extremely demanding towards the seller. We only bought a piece of konparet – these were sold by small squares unlike the traditional konparet which are round in shape – if these treats were hot, and we required that the seller give us each a slice with a piece of coconut on top. That garnish didn’t change much to the taste of this cake-bread typical of Jeremie (south of Haiti) since it’s actually prepared with coconut. The preparation includes a mix of cinnamon, ginger and grated coconut. We, however, loved the extra crispiness that the garnish coco, which had grilled during the cooking process, added to the thick crust of the konparet.

We gobbled our hot konparet up as quickly as we had bought it, proof that the name of this treat suits it well. Konparet apparently get their creole name from the fact that they are so delicious that one eats them as soon as they are ready, « quand’l paraît’t » (when it shows up in French), « kon’l paret » in Creole.

Does it deserve its name? As children, we certainly thought so.