These are the words that come to mind as I look at the picture below I took in Belladère – a town in the center of Haiti. That picture is filled with memories of my childhood. 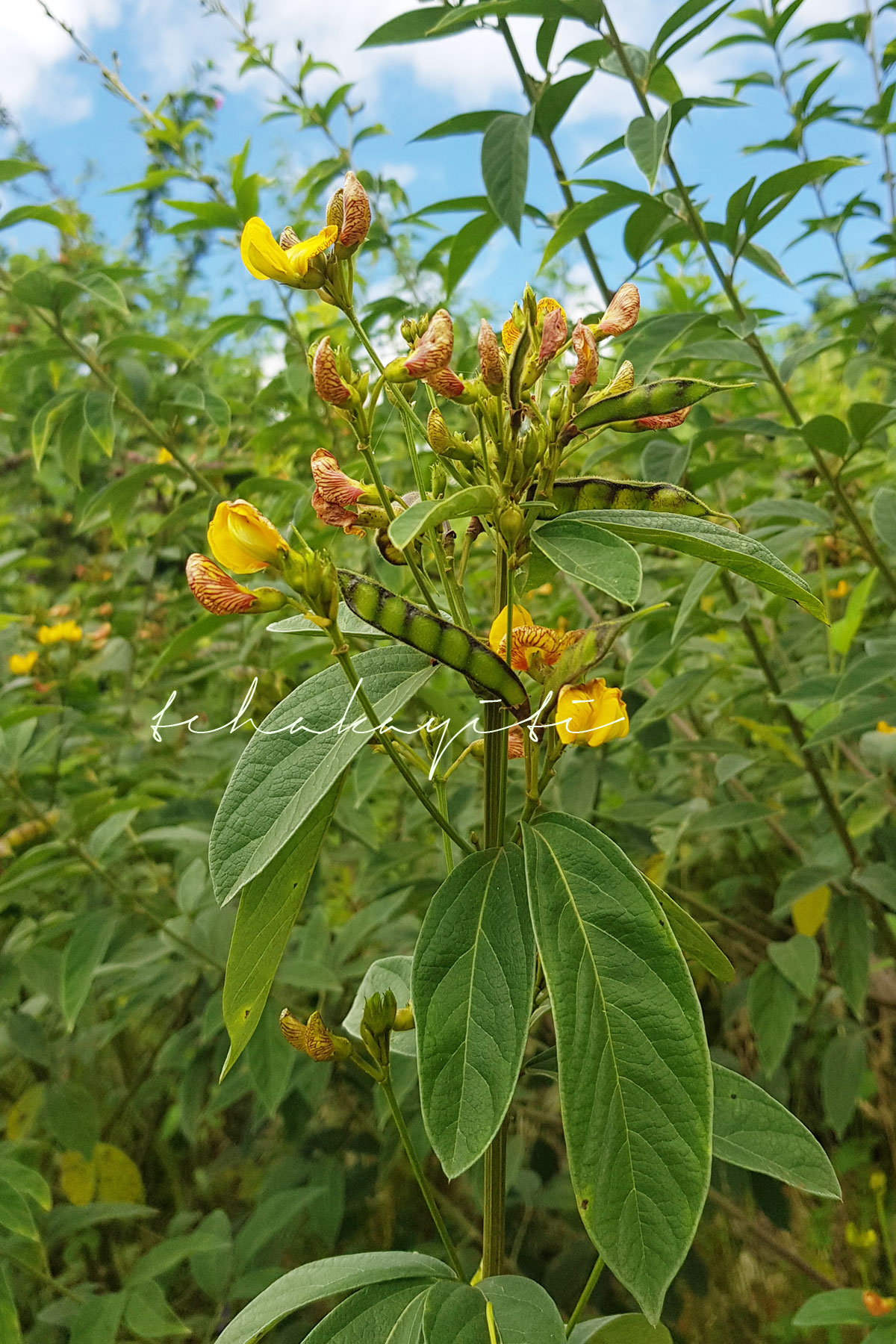 I am sure you are wondering how a tree can bring up images of a small straw chair to mind. To you, I say:

When we were kids, we spent quite some time at my grandmother’s house in the hills of Pétion-Ville.

Her house was perched on a steep mountaintop that we loved to believe was “our” mountaintop and ours only. At the time, unoccupied lands, which were used for crops, surrounded her house. Much like our walks to the hills of Kenscoff helped us discover countless fruits, our days spent at her house were a chance for us to come in direct contact with Mother Nature. Though we were not allowed to climb too far up that mountain, we had the chance to run wild and free through its fruitful crops. We spent quite some time watching harvests as well.

The gorgeous tree illustrated above and its yellow red flowers that bring joy to one’s eyes and soul grew on the land next door. It lined up our favorite beaten track. We were drawn to its pods that are actually a bean variety known as pois congo (pigeon peas). Our grandmother warned us on a daily basis not to handpick until harvest season. I believe that is the one rule we didn’t try to break too often. The reason? We knew that harvest season meant that we would get a chance to witness the congo beans being taken out of their pods, a process that impressed us. 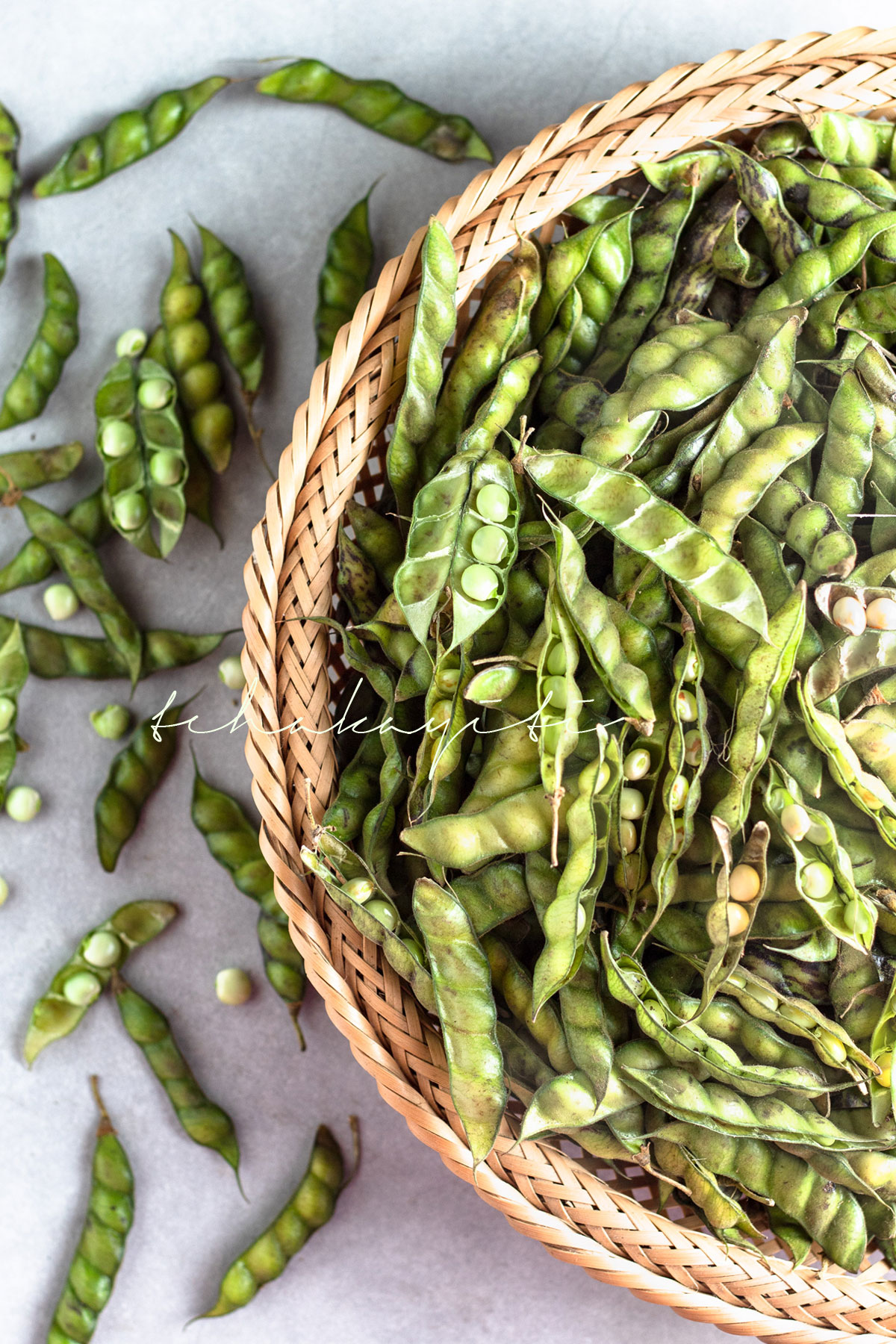 After each harvest, the cook received baskets filled with congo bean pods.

She who would grab her straw chair and a bowl, sit down and start peeling with an unmatched dexterity. She would effortlessly crack the pods open with one hand and run her fingers through its core. That technique helped her extract the beans that she transferred to her bowl in a blink of an eye. We stood there watching her every move, nearly begging her to show us her trick.

From time to time, she would take a quick break to teach us her technique. We would carefully watch as she held one pod in the palm of her hand and used her thumb to open the shell, usually on top of a bean where it was easier to crack open. After each demonstration, convinced we had gotten it right, we would beg her to hand us a few pods so we could give it a try and help her.  With each attempt, we realized that it was not as easy as it looked.

Our tiny fingers couldn’t quite master her technique. We mostly managed to rip the outer shell in the wrong direction instead of cracking it open like she did. We almost always gave up as quickly as we had attempted to imitate her moves. Thing is, we were not necessarily interested in extracting the congo beans. We simply wanted to be able to take them out as quickly as she did. So, even though we managed to take the beans out of their pods, we gave up on trying.

Our failed attempts didn’t drive us away from her and her straw chair, however.

We stood over her shoulders through the entire process taking in the leafy but fresh smell that filled the air. A fresh smell I wouldn’t mind taking in as I am committing these words to writing.

Those are days I could never forget. To me, watching this tree wherever it may be is like a breath of fresh air that reminds me of those days on “our” mountaintop. The congo beans tree represents the carefree life we enjoyed as kids growing up in Haiti and exploring its mountainous lands.

I first published this story on November 5, 2015. The 2020 version includes text revisions and new pictures.