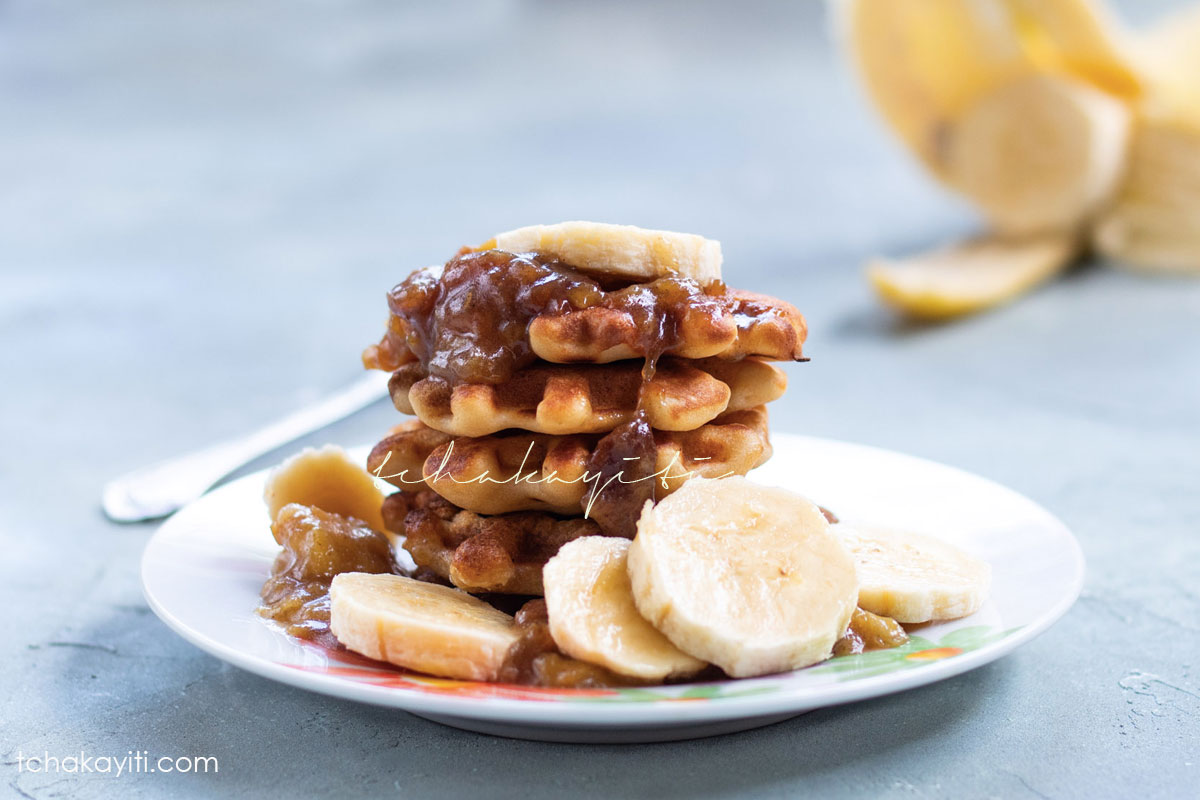 What happens when this Haitian girl prepares caramelized banana waffles? Well, she adds her own twist to the batter, of course. But that is not all she does. She also dresses her waffles with local flavors. More on that in a bit. I need to tell you about my taste for waffles first.

Waffles are one of the very few breakfast items I actually have a taste for.

See, I don’t do breakfast. Actually, let me just say it out loud. I hate breakfast. Yes, I just said that. I am not a fan of the most important meal of the day.  For as long as I can remember, I’ve never enjoyed breakfast. I never understood it. It never made sense to me that I could get hungry just a short two hours after indulging in it. So, I skipped it. And, I still do.

Now before you accuse my folks of bad parenting, let me just tell you that they tried. They tried eggs. I hated eggs. They tried oatmeal, cereals, yogurt. You name it. None of those worked. Perhaps they should have tried waffles. Maybe then I would have enjoyed breakfast.

Then again, they probably wouldn’t have solved the problem. I couldn’t eat waffles every day. They’re on my list of favorites. But I enjoy them with moderation. I only partake in a waffle feast once a month at most. I sometimes even go months without preparing them.

But I must say, when I do, I tend to go all out. I devote an entire morning to prepping them. Because, I like my waffles from scratch. Also, I like Belgian waffles. This means, preparing the batter takes a bit longer. But they’re worth the extra effort. Belgian waffles are rich and creamy. They’re perfect for my taste. 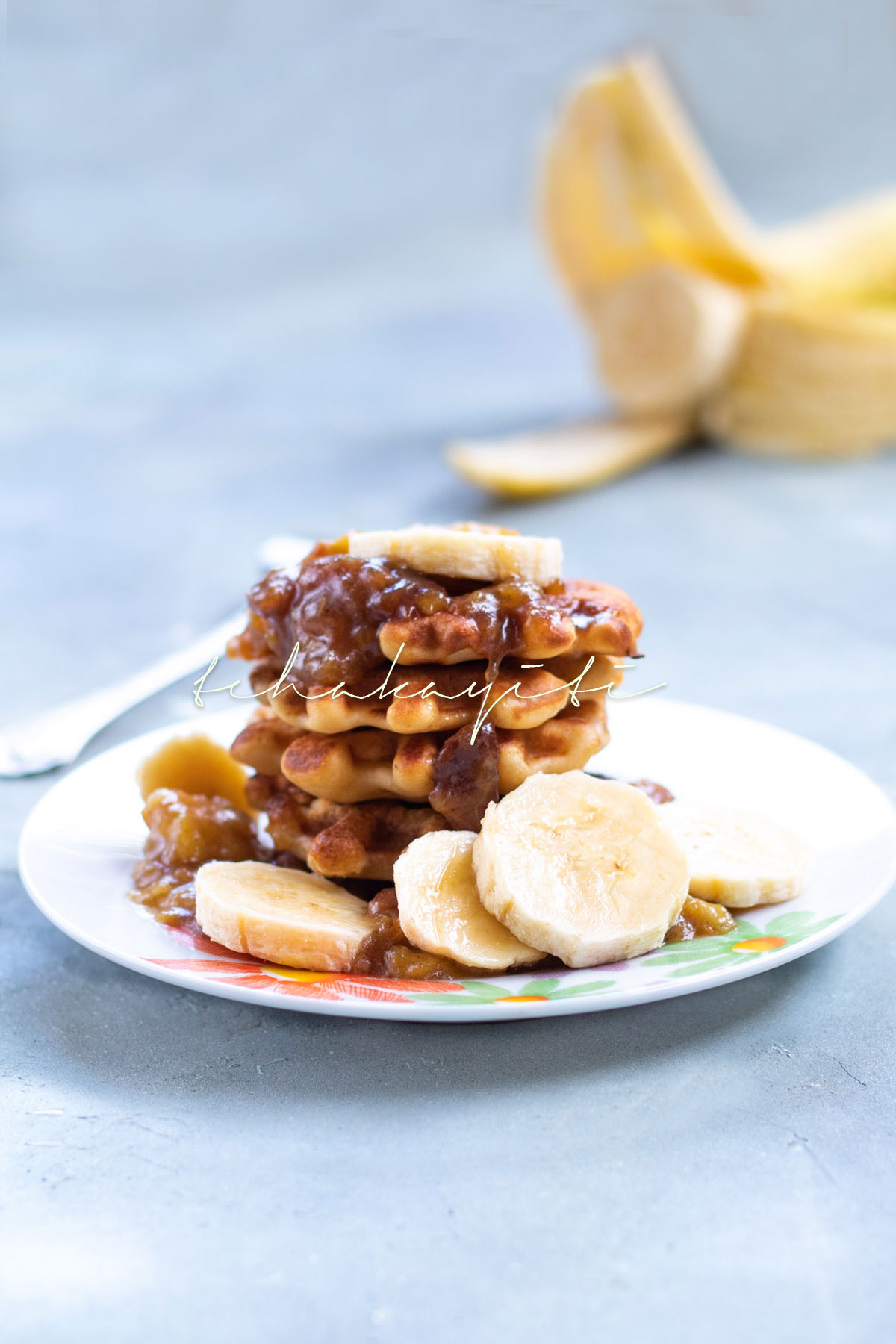 Now why on earth am I serving you caramelized banana waffles on here?

Because, as I mentioned above, I added my own twist to this recipe. I prepared my waffles with a Haitian flair.  For starters, I enhanced my batter with lime zest and vanilla, just like any Haitian cook would. We add sweet spices to any sweet dish that calls for eggs. What can I say, we believe these spices help bury the eggy taste.

For seconds, waffles are as good as their topping is. And for these waffles, my topping was very Haitian. The bananas came straight from our lakou lakay, my family home backyard in Haiti. To caramelize them, I swapped regular sugar with our locally prepared rapadou. What is this rapadou nonsense I am talking about? It is a local artisan sugar prepared with pure sugarcane juice. That sugar is sold rolled into palm leaves. It has a taste that is kindred to that of molasses in solid form. A taste that reminds me of our bonbon sirop. 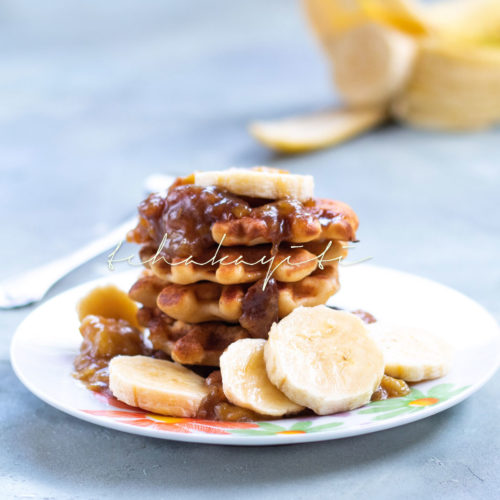 These waffles make the perfect breakfast. They also make a great dessert. You could serve them alongside some vanilla ice cream for a great treat. My recipe for those Belgian waffles is inspired by the one from The Recipe Critic. I only prepared half her recipe, however because I needed a small batch which yielded 12 mini waffles, enough to feed three people. I also added vanilla and lime zest to the mix.
Print Recipe Pin Recipe
Prep Time 30 mins
Servings 3 people

For the caramelized banana

For the caramelized bananas

Our homegrown bananas are not as firm as your regular bananas. They turned into a delightful puree when I cooked them down in the butter and sugar mixture. Your results might be different with a different banana variety with a firmer flesh. I used our local rapadou in lieu of sugar but this recipe will be as equally delicious with packed brown sugar.