Sitting at my desk, sipping my morning coffee, I can’t help but smile at the weekend that just unfolded. A weekend filled with culinary adventures. One in particular remains memorable. 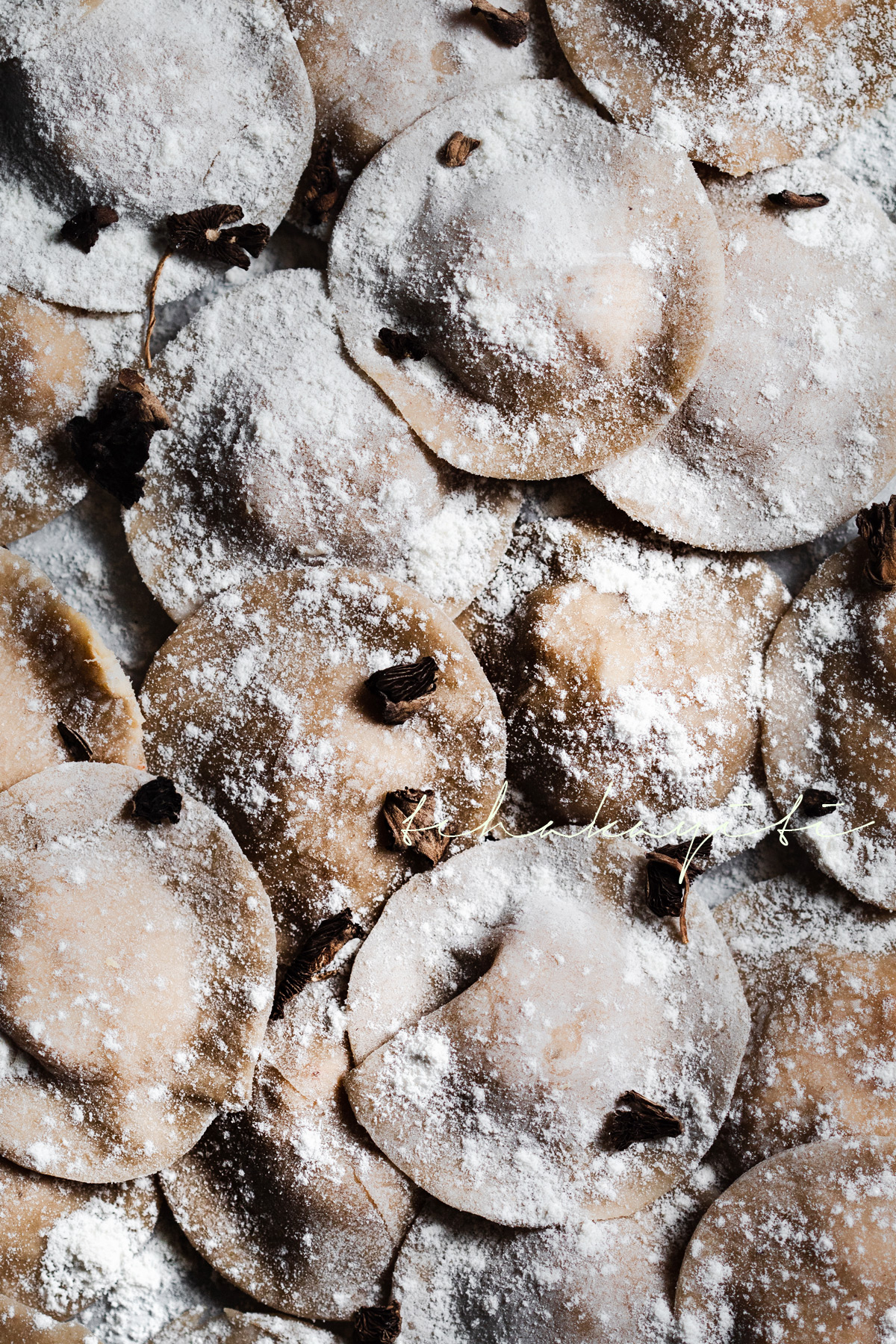 I had never made pasta before. In fact, for the past five or six years, I’ve wished I could make my own pasta. But, I never took the plunge. Instead, I spent countless hours debating whether or not I should invest in a pasta machine. Only to give up each time, coming up with every excuse in the book:

too expensive, too heavy, will I actually ever use it….so the list went on and on.

But then, last week, everything changed. I posted djondjon on my Instagram, and a follower suggested I prepare djondjon shrimp ravioli with peas. I thought she meant that I should serve store-bought ravioli with a djondjon infused sauce. But I was wrong. She actually urged me to try to make djondon flavored pasta. And she insisted I do so.

Yep, she suggested I prepare pasta from scratch, and infuse the dough with djondjon. And I listened.

Not without, of course, once more pulling an excuse out of my book of favorites: I don’t have a pasta machine. To which she simply replied:

you only need a rolling pin.

As if I had been waiting for someone to push me into that direction all those years, I actually followed her lead. Thus began my weekend shrimp ravioli making with a rolling pin adventure.

Those shrimp ravioli were quite the arm workout.

A worthy workout. That hour I spent rolling my dough paid off. Now don’t worry, I am not about to claim to be a pasta making expert. After only one attempt, I wouldn’t dare say so. As exquisite as that dish turned out, I won’t try to give you tips on successfully making pasta, either. I will however advise that you prepare yourself for a workout. If you chose to follow my lead and use a rolling pin that is. I will also tell you that I adapted this online ravioli recipe from Julia’s Album, swapping a djondjon broth for the regular water the recipe calls for. 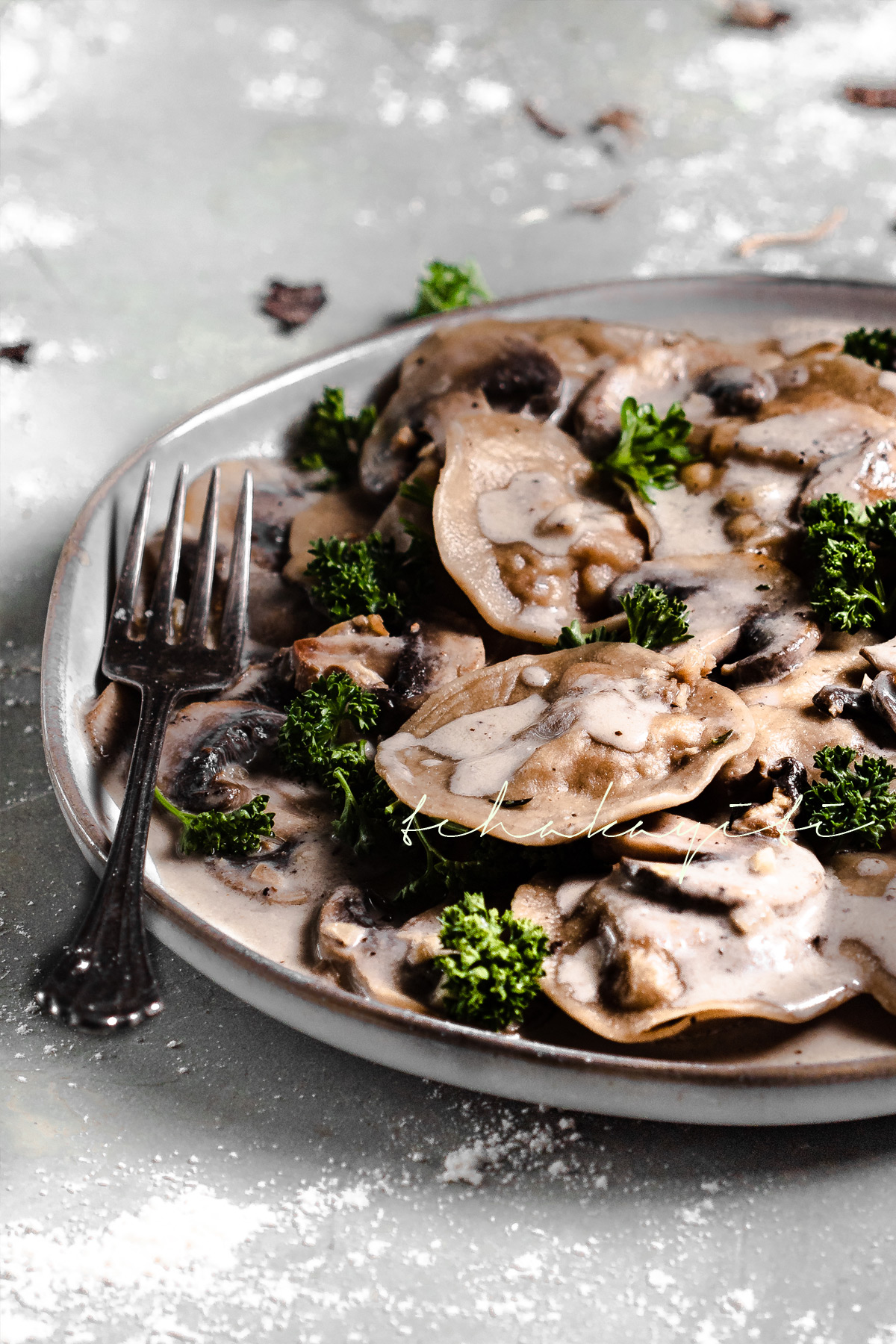 And most importantly, I will brag about my finger-licking good stuffing and sauce. So here it goes.

I stuffed my ravioli with garlic butter shrimp tossed with a few teaspoons of cheese dip. I then cooked my pasta in my favorite homemade djondjon seafood broth. While the shrimp ravioli cooked, I prepared another djondjon and wine infused creamy mushroom sauce. I tossed my cooked ravioli in that sauce and served it sprinkled with fresh parsley.

Everyone at the table sang those djondjon shrimp ravioli’s praises.

My only regret is not having served my ravioli with bread to soak in the last bits of the sauce.

I honestly cannot remember the last time I felt so happy about a dish. And I am thankful for that follower for holding me accountable for preparing it. Had she not insisted, I would have kept pushing my pasta making dreams aside.

While I enjoyed making these shrimp ravioli from scratch, I know not everyone will want to do the same. And that’s okay. You can still follow this recipe using your favorite store bought ravioli. Simply skip the ravioli making step below; cook your pasta in the djondjon broth; and serve it with the djondjon infused mushroom sauce.I personally borrowed this ravioli recipe from Julia’s Album, but used a djondjon broth instead of regular water. I must tell you that, contrary to popular belief, adding the djondjon broth to the dough won’t turn it black. It gave the dough a slight taste of djondjon that the sauce complements well.
Print Recipe Pin Recipe
Prep Time 2 hrs
Cook Time 20 mins