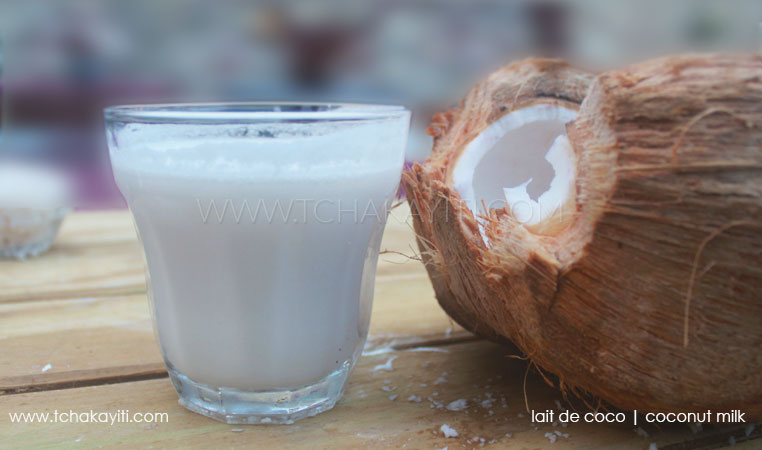 After sharing four coconut milk based recipes that include our famous blan manje, Haitian goodies known as dous kokoye, Haiti’s Holiday drink cremas and some homemade coconut ice cream by yours truly, I must confess that I have never once made my coconut milk from scratch.

Indeed, even though all the recipes mentioned above call for this flavorful exotic milk, I usually rely on already made coconut milk. What a shame for a girl who’s been trying to teach you about Haitian cooking, huh?

Truth be told, even though cooking is a labor of patience and love for me, sometimes, I just want to enjoy a hassle-free sweet treat that I can whip up in minutes. And that is exactly what I have been doing with the above recipes; I have been taking shortcuts.

I have been skipping the buying fresh coconut, extracting the water, taking out the flesh and grating it to later crush and strain it process because it can be a long one, especially when a recipe calls for a significant amount of coconut milk.

I must however confess that I am fully aware of the fact that nothing beats the homemade version. That is why, today, I have decided to share the steps to follow to extract your own coconut milk from a freshly cut fruit with you.

Another reason I am explaining the process to you is that coconut milk is actually a common ingredient in our local cuisine. We rely on this mildly sweet creamy liquid not only for our sweet desserts and drinks but for some savory preparations as well. Our diri nasyonal also known as diri kole is often enhanced with a subtle creamy coconut flavor. The same can be said of our mayi moulen to which we often add coconut milk especially when we make mayi kole, a preparation similar to that of our diri kole. They both are cooked along with the beans, a method I plan on sharing with you somewhere down the road.

These are just a few of the culinary purposes we find for this milk made from the white flesh of a mature coconut, a flesh we would call nannan rèk locally, in our Haitian cuisine.

With so many preparations, knowing how to make your own coconut milk might come in handy one day especially if you have coconuts lying around at home like we often do at my house. Plus, preparing it also means you get to make your own poud damou, our version of toasted coconut to which I devoted the “Poud Damou, a playground favorite” article.

In the meantime, try your hand at making your own coconut milk, and remember that you may not have to discard the flesh once you are done. But that will be the topic of another story.

Coconut milk doesn’t call for a recipe per se. I will nonetheless list the tools you will need to be able to prepare it.